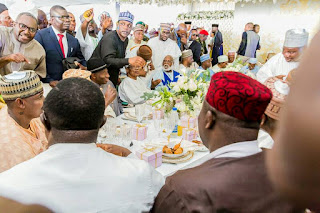 Halima, last daughter of the former head of state, married Auwal Abdullai, the sarkin Sudan of Gombe and also a businessman. Among the dignitaries at the event were former President Goodluck Jonathan, his wife; Namadi Sambo, former vice-president;Senate President Bukola Saraki; Bola Tinubu, national leader of the All Progressives Congress (APC); and Pius Anyim, former secretary of the government of the federation.

Also in Minna for the occasion were Idris Kutigi, former chief justice of the federation, Ahmed Yayale, former head of service, and Ben Obi, a former senator. The ceremony also attracted Ibrahim Haruna, chairman, IBB Golf Club, Sani Zangon Daura, and Aliko Dangote. Also in attendance were former ministers, serving and former senators, and many others.

According to NAN, Abdullahi paid a bride price of N500,000 and 10 cows. Garba Wushishi, a former minister of information in the Shagari administration,performed the handing over Halima to Abdullahi. Ibrahim Dankwanbo, governor of Gombe state, received the bride on behalf of the groom.