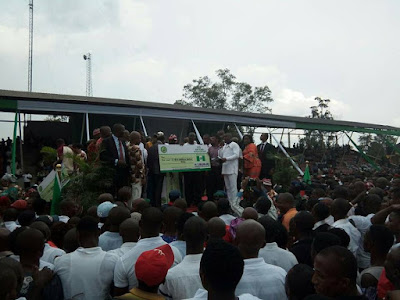 Three hundred and five Youths with one each from the 305 wards in the State were given N1m each by Governor Rochas Okorocha as part of the empowerment programme of his administration. The Young millionaires were produced through balloting at their various wards. The governor had before now promised to make some youths millionaires.

Presenting the Cheques to the youths during the Democracy Day Celebration on Monday, May 29, 2017 at the Heroes Square Owerri, Governor Okorocha said his intention was to totally wipe out Poverty in the State, assuring that he would personally mentor the beneficiaries to ensure that the one million naira each of them has got would make them comfortable millionaires at the end of the day. 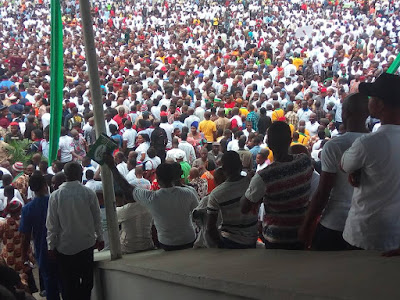 He advised the beneficiaries not to use the money for pleasure, but to take off with it to become great in business, stating that most millionaires today didn’t start business with upto One Million naira, expressing joy over the high level of economic activities in the State.

The governor had, the previous week also empowered Three Thousand and Fifty women with ten each from the 305 wards and empowered them with N100,000 each, and said he would produce as many millionaires as possible before the expiration of his second tenure in 2019.

On the Democracy Day Celebration, the governor told Imo people “I am here because you have made it possible. I’m here standing as the Governor of Imo State because you all have voted me as governor. We are here gathered to celebrate democracy which is government of the people, by the people and for the people. This is the day of liberation. This is the day when the masses had a voice over the governed. This is your day because those ballot papers you have in your hand is the power with which you decided who must govern you at every level of government”. 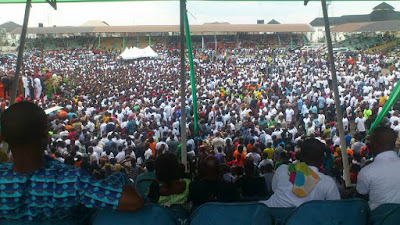 His words “May I, at this point congratulate the founding fathers of this great nation who have brought democracy to be. Though we have not gotten it absolutely right in democracy practices, but there is light at the dark end of the tunnel. I believe that one day, Nigeria’s democracy will surpass that of the perfect American democracy”.

He stated further “Let me again at this point congratulate and appreciate the founding fathers of Imo State of which if they had not been governors at particular times, maybe I wouldn’t have been a governor. I remember vividly the Sam Mbakwes, the Udenwas, the Ohakims, the Enwerems and all the Military administrators that have governed this State before I emerged as a governor. I’m a governor elected under the platform of APC and APGA in the first instance and may I say to all of you that I’m very happy to be part of this democracy day which you have made possible”. 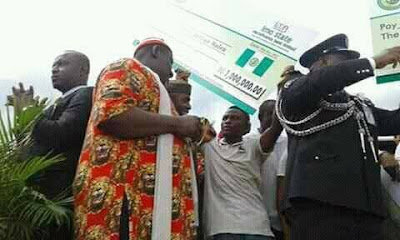 Hear him “At this point, it is important that we look at what has been done down the line. I recall that light came in 2011 and since then darkness has not been able to comprehend it. I came on a single mission to rescue my people from ignorance, poverty and deceit. That is the anchor of my government and I call it Imo Rescue Mission. May I sound boisterous that from 2011, Imo is indeed better. We may not have been where we want to be, but there is a dramatic transformatory and geometrical change in Imo State”.

“Six years ago, security in the State was a serious problem, kidnapping and armed robbery became the order of the day including child trafficking. Darkness was the order of the day. With the coming of the Rescue Mission administration, there is a better security arrangement than it has ever been since the creation of this State”.

“We promised to make education free and nobody believed us, but today education is free from Primary to Secondary and to tertiary levels. We don’t have out-of-School children anymore or children hawking on the streets, we don’t have parents selling their goats and saving money for payment of School fees”.

“I believe education is key, education is future and education is power. That is the industry we have defended very well. We are still ranking the best in the Federal Republic of Nigeria”.

“Our road infrastructure have been the best with our urban renewal programme with the construction of several inter-city roads and inland roads and bridges. Today, we will put a hallmark of job, job, job, industry, industry, industry. Today, 305 youths will be going home with one million naira each to the glory of God. Thank you all for your support and may God bless you”, he stated.

Chief Press Secretary to the Governor