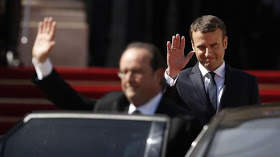 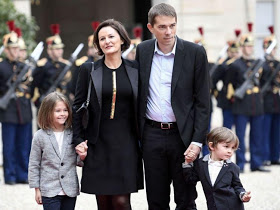 Emmanuel Macron has been inaugurated as France’s youngest ever president in a ceremony at the Elysee Palace in Paris on Sunday, May 14.

The 39-year-old centrist leader was greeted on the steps of the presidential residence by outgoing president, Francois Hollande.

In his inauguration speech, he pledged to fight terrorism and also listed “the excesses of capitalism in the world” and climate change among his future challenges.

Following the ceremony, Mr Macron accompanied Mr Hollande as he walked to his vehicle in the palace forecourt and drove away as the new president waved him off.

A source close to the president has told Reuters that his prime minister will be appointed on Monday. The remainder of his government will be announced on Tuesday, the source said.

Speaking after the ceremony, Mr Macron said France had chosen “hope” and vowed to give French people their confidence back” He went on to promise that the beleaguered European Union would be “reformed and relaunched” during his time in office.

“The division and fractures in our society must be overcome. The world and Europe need more than ever France, and a strong France, which speaks out loudly for freedom and solidarity.”Mr Macron won the second round of voting last Sunday, gaining 66% of the vote and beating far-right candidate Marine Le Pen.

Earlier, Mr Macron was handed France’s nuclear codes, putting him in charge of what will be the EU’s only arsenal of atomic weapons after Brexit is complete.
He was driven through the streets of Paris to the 18th century palace that will become his home as the eight president under France’s current republic, which was founded in 1958.

Macron’s 64-year-old wife and former school teacher Brigitte arrived separately and walked up the red carpet into the Elysee wearing a pale blue outfit.
Among those who attended were his stepdaughter, Tiphaine Auziere and her husband, stepson, Sebastien Auziere and his wife Christelle and their children.

A source has also revealed that he is expected to visit French troops deployed abroad at the end of his first week as president, probably in Mali.He has already appointed Alexis Kohler, who was his chief of staff when he was economy minister, as his secretary general, who will act has his chief administrator.
Philippe Etienne, a former ambassador to Berlin, will act as his diplomatic adviser.
It was revealed that the suit he wore for his inauguration cost a modest €450 (£381), in an apparent attempt to dissociate himself from “bling-bling” politician