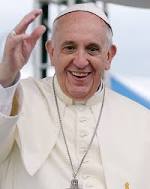 Pope Francis on Wednesday condemned a suspected chemical weapons attack in Syria that left more than 70 dead in a rebel-held town as an “unacceptable massacre”.

“We watch horrified as the latest events in Syria unfold,” Francis said at his midweek public audience in St Peter’s square.

“I completely deplore the unacceptable massacre that took place in Idlib province yesterday, where dozens of defenceless people, including many children, were killed.”

The 80-year-old pontiff spoke out as Russia and Western powers disputed what happened at Khan Sheikhun, where at least 72 civilians, including 20 children, died.

Russia, which has provided military and diplomatic backing for Syrian President Bashar al-Assad in his fight against the rebels, said the deaths occurred after government forces bombarded a “terrorist warehouse” containing “toxic substances.”

British Foreign Secretary Boris Johnson said that “all the evidence” pointed to Assad’s regime “using illegal weapons on their own people.”

UN chief Antonio Guterres said the global body would seek to establish who was to blame for a deadly episode, which he said had “demonstrated that war crimes are going on in Syria.”