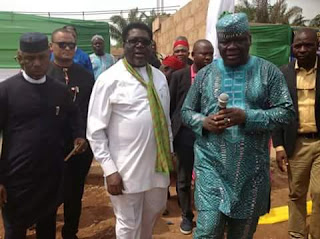 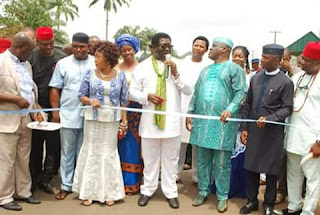 The Governor of Imo State, Owelle Rochas Okorocha has commended Hon. Asiwaju Jerry Alagbaoso, a member of House of Representatives, National Assembly for joining hands with his Rescue Government to impact on the lives of the people especially the people of his immediate constituency, Orlu-Orsu-Oru-East Federal Constituency.


Imo State Governor made this commendation through his Deputy, Prince Eze Madumere this afternoon during the commissioning of some of the projects attracted by Hon. Alagbaoso, which its grand ceremony held at Orsu local government Council Headquarters.

Prince Madumere who was accompanied by Ugwumba Uche Nwosu, Chief of Staff, Imo State Government House and Dr. Edward Ihejirika, Adviser to the Governor on Health, was conducted round the project sites by Asiwaju Jerry Alagbaso. The Deputy Governor described Alagbaoso as a great son of the Imo State who does not play politics of bitterness. He applauded him for borrowing a lead from a great leader like Owelle Rochas Okorocha who does not ever play politics with the welfare of his people.

"Asiwaju Jerry Alagbaoso is a great son of Imo State who is representing Orlu-Orsu-Oru East Federal Constituency in the House of Representatives. What he has done is commendable. He has been very supportive of Owelle Rochas Okorocha led Rescue Mission Government despite the difference in political platform. He understands that after politicking follows Governance. This is one area where follows the foot step of our leader, Owelle Rochas Okorocha. What we have come to do today is apolitical because it about dividends, which is for the good of all..."

Some  of the roads with critically failed sections that were either reconstructed, or rehabilitated are Ihiala-Orlu-Umuduru Road, Spur from Ihiala-Orlu-Umuduru road to Ihuoma- Umuhu Okabia-Orsuihitteukwu-Orsumuoghu. Some parts are already completed while others are ongoing. Alagbaoso also attracted the ongoing construction of ultra-modern police station, one each of the constituent Local Government. The commissioning foundation stone laying ceremonies of the projects was performed by Governor Okorocha ably represented by his Deputy, Prince Eze Madumere.

Earlier, Asiwaju Alagbaoso in his written address after reeling out his impressive performance stressed that the project he attracted should not be politicised since they are to be used by all parties. He described his efforts as complimenting to the the effort of Governor Okorocha who he described as the best Governor Imo State has ever had.

His words in parts; "Your Excellency, it is only those playing to the gallery, argue that you are not performing. Those non-performing propaganda or sayings by some characters are decorated lies or spins for mere "Hara-Kiri" of politics. ... I am qualified to in all its ramifications to assess administrative performance so far in Imo State. Consequently, without fear of contradiction, I make bold to describe you as "a living giant of positive achievements" but also as "a giant actor in the massive infrastructural development in the historical, administrative and political space of Imo State and Nigeria.

The high points of the event were the calls by Prince Madumere and Ugwumba Nwosu who called on Alagbaoso to quickly join the performing All Progressives Congress party without further delay. Hon. Nwosu also stood in as the Chairman of the occasion.