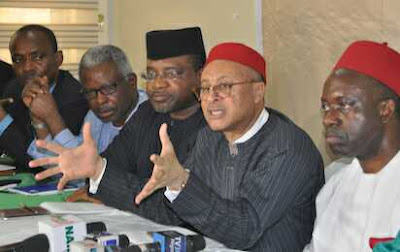 This came as the group claimed Nigeria was becoming a failed state, despite having the potential to be one of the most prosperous nations on earth. Other signatories to the statement, read by Prof. Soludo include; Profs. Chidi Odinkalu, Ebere Onwudiwe, Mr Law Mefor, Rev. Fr. Jude C.; Emeka Ugwu-Oju, Ferdinand Agu and Tony Nnadi. Others are Dr Sam Amadi, Mr Innocent Chukwuma, Collins Ugwu and Andy Wabali Addressing journalists in Abuja, Prof. Soludo said: “We demand for the urgent release of Nnamdi Kanu, his colleagues and all prisoners of conscience, as part of the process of the search for national cohesion and building a new Nigeria. There is a legitimate debate among Nigerians on the Biafra question, and there are indeed many Igbos who, like many other Nigerians, do not agree with Nnamdi Kanu’s objective or means. It needs to be stated, however, that no citizen of Nigeria deserves the kind of treatment meted to him and his colleagues. Government has declined to obey the orders of properly constituted courts in Nigeria for his release. Nnamdi Kanu is not above the law; but, nor should he be put beneath it.