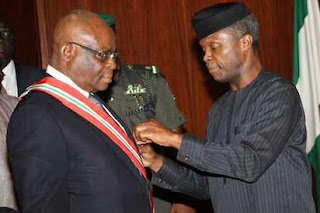 Ag. President Yemi Osinbajo decorating Justice Walter Onnonghen with the National Honour of the Grand Commander of the Niger during the oath-taking ceremony as the CJN at the Aso Chambers, Presidential Villa, Abuja.