Owerri, the capital of Imo state hosted captains of industries, scholars, technocrats, citizens and statesmen at the commemorative lecture of Imo at 40 which held last year.

The occasion offered the eggheads, entrepreneurs, politicians and youths the platform to engage in intellectual discourse for the future of the nation.

The theme of the event organised by Arise Afrika,  Nigerian Eye News Paper in conjunction with GCFN Consult was: Analysing the future of socio-political persuasion in today’s Nigeria: The way forward.

There were several paper presentations of the theme of the event.

In his presentation, Prof Benedict Nwoke reminded the leadership of the nation and the older generation that mentorship is important to the growth and development of human race.

He made allusion to Jesus Christ, who nurtured 12 disciples to achieve what He couldn’t wait to do on earth.

Bemoaning the fate of the younger generation, Nwoke said all hope is not lost in building positive mindset that would aid them achieve better and more productive society.

He reminded participants of the exploits and excellence of some Igbos in the past through entrepreneurship, discipline and focus, urging the youths to move-on towards positive change.

Founder of the Soren Keikergard Society West Africa, Rev Fr Prof. Ogbonna, which is the first philosophical minded academic society in entire sub sahara Africa took the gathering on the meaning and role of a teacher.

He also spoke on the place of education in human development and character building.

All of these, he said, are important in developing good leadership that steers the ship of nation to prosperity.

He called for a rethink among youths, parents/guardians and the government operators at various levels.

Vice Chancellor of Imo State University, Prof Adaobi Obasi, stated entrepreneurship is necessary to arrest the current situation bedeviling the nation with its population in favour of the youths.

She lamented that many youths have been forced to join militant and kidnap groups as well as cross Mediterranean Sea in pursuit of elusive wealth.

This desperation, she said, would never address the raging issue of unemployment without constructive approach in the education sector.

Prof Chidi Osuagwu took the audience on Igbo true position in today’s Nigeria as well as measures to take the future by storm.

He extolled the race’s abilities to solve problems before they surface.

According to him, an understanding of the Igbo identity and what they could do remain the turning point to achieving greatness.

Dr Ibeneme McGinger, a medical practitioner, called on the leadership of the nation to swiftly undertake a re-structuring process that would see citizens have faith and also, love the nation.

Representative of Imo State Governor, Engineer Chidi Ibe, called the Igbos “living catalysts”, saying they have consistently found solutions when and where it mattered most.

He also called for elevation of merit, character and integrity in all spheres of life.

After the lecture, an award ceremony took place.

Imo First Lady Nkechi Okorocha was honoured for her positive influence in defining the women folk and downtrodden through She Needs A Roof Project Initiative (SNARP).

Others include: Dr Ibeneme got an award for his health initiatives during the Ebola outbreak and Cliff Ayozie of Nigerian Television Authority (NTA).

Hon. Chike Okafor, Hon. Mere and others were also honoured.

Publisher and editor in Chief of Arise Afrika Magazine , Mr Ikechukwu Anyanwu, commended the participants and guests for taking out time to be at the event.

He reiterated the publication will remain committed to its goal of redefining Africa  to the world.

According to him: “As an Imo son, I and my team of journalists have come to the realization that this journey that started seven years ago in Ghana need to take a turn home.

“Redefining Nigeria to the world will not be a complete exercise without Nigerians in Nigeria sharing in this educative and thrilling experience that rekindles devotion and patriotism in the spirit of Nigerians for their nation.

“So, we decided to take this step and make our contribution in nation building via  bringing our people together in discussing the strongest challenge our nation is facing today.” 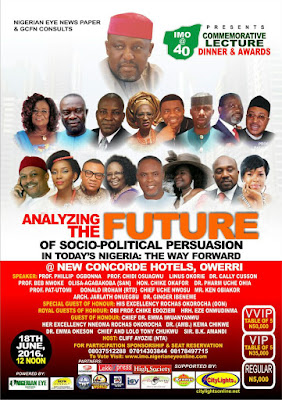