Exit of a leader..: Late Chief Sylvanus Oyongwo to be laid to rest Sat 21 January 2017 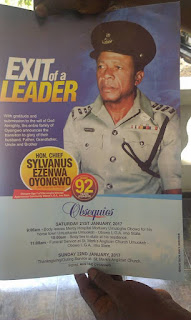 All roads will lead to Umuokeh Obowo in Imo state this Saturday, 21st January for the burial of His Honor, Chief Sylvanus Oyongwo who passed on late last year.

He was 92 years old. This is not a case of 'we regret to announce...'. The man did well for himself, his family, community and country.

He is survived by his wife and four rugged sons - Austine, Freedom Oyongwo, Richard and Ifeanyi. Freedom Oyongwo PhD is a Deputy Registrar with Michael Okpara Federal University of Agriculture, Umudike, Abia state.

Arise Afrika wants to thank our own Dcn Chike Okafor , Hon Barr. Kennedy Ibeh, Chief Emmanuel Okewulonu and several others who in their usual manner have made personal visits and contributions to make sure that the burial will be very befitting.

May the soul of the departed rest in peace.