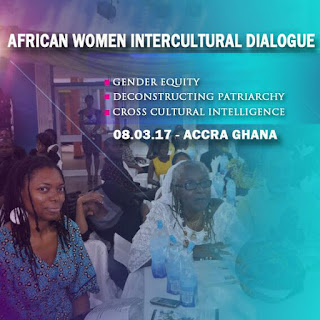 United Nations Educational Scientific and Cultural Organisation UNESCO has confirmed their participation in African women Intercultural Dialogue an  educative event being put together by All Africa Media Network To mark the 2017 International women's day Celebration in Africa on March 8 at the Accra International  Conference Centre.

8th of March is  inaugurated by the United Nations as a day with which to celebrate and create political and social awareness on the struggles and accomplishments of women globally.

The  African women   intercultural dialogue is an event in which Iconic Africans drawn from diverse facets of African society and beyond are to come together and explore cultural issues contributing to Under-development of the African woman and girl-child.

The Intercultural dialogue  shall  investigate negative cultural practices that condones violence against women and deliberate with leaders of the social institutions that its hinged on be it religious ,cultural or social, the organiser's  intends to come out from the dialogue with a  blueprint  with which to overhaul  practices like child marriages, female genital mutilation , denial of women the right to inheritance and to own lands, and also  preserve  positive cultural norms from the ever evolving cross -cultural clashes between inter-cultures and  propagate cross cultural intelligence and positive cultural exchange.

Expected to enrich the audience are concerned citizens and leaders of social institutions like labour unions, religious organisations, civic society leaders, heads of market women associations, activists, African first ladies, women in politics and country representatives of International organisations that works in the field of gender, culture and child rights, cultural leaders from different regions in Africa and beyond.

In his official response to the event organisers , Mr. Tirso Dos Santos head of Mission UNESCO Ghana emphasized on the importance of the dialogue "UNESCO considers gender issues an important dimension in its operations and will participate in the dialogue"  he concluded.
The program coordinator of All Africa Media Network ,Mr. C. Iwuoha also disclosed that they are open to support ,sponsorship and collaboration from corporate organisations, civil societies and interested individuals to ensure a successful  intercultural dialogue.