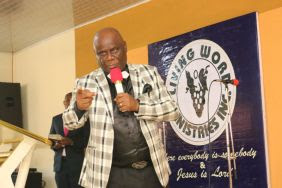 When he thought about planting a church in his hometown of Ossah Community in Umuahia, Abia State, the President of Living Word Ministries International― Bro Emma Okorie― must have had more than Roy T. Bennett’s statements to fulfil: “Dedicate yourself to what gives your life true meaning and purpose; make a positive difference in someone’s life.” It must have been more than the thought of affecting a person’s life obviously; it has to be a coordinated attempt to bring the greatest goodnews of Jesus Christ to his entire people. So on the 27th of November 2016, the Goshen Church was inaugurated at Umugbo Eziama Ossah, Umuahia with the service starting at exactly 2:50pm.

The service opened with the hymn “To God Be the Glory” sang by the entire congregation, accompanied by the beautiful sound of a saxophone and well-blended music. Once the hymn got done, the people went around greeting each other on the directive of Pastor Elisha Chimuanya who was functioning as the moderator. The opening prayer was said by Pastor Boyle Okwandu immediately followed by a powerful praise session by the Worshippers who also introduced the people already to what worshipping at the Goshen Church would be like when they led the congregation to the throne room of God in a glorious worship experience. 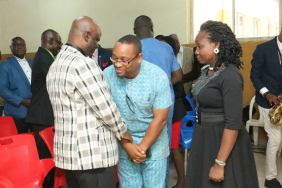 Returning to the podium as the moderator, Pastor Elisha reminds the congregation that it must have stemmed from revelation for the President, Bro Emma Okorie, to have given the name ‘Goshen’ to the new church even in the reality of Nigeria’s current economic recession. He invited Mr Lazarus who gave testimony, thanking God for total restoration. He gives narrative of how he had reported himself to the Police after knocking a woman down with his vehicle; was mandated by the family of the deceased to sponsor the burial arrangements after having his car impounded by the same people and how God touched their hearts to refund all he had paid for the burial and release his vehicle. Mrs Charity Ekechukwu also thanked God for the much love and care she has enjoyed since joining Living Word Ministries, comparing it to none other church she had been to. She also blessed God for the vigor and strength supplied to her bones and entire body to still pursue the things of God and be at all church gatherings she needs to attend. The Kingdom Lambs also rendered a special presentation of bible recitations, much to the amazement of the President who knew not how best to hide his awe than smile the full length of their presentation. 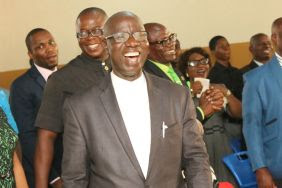 Welcomed to the podium with thundering claps and cheers on the moderator’s introduction, the Apostolic Cover of Umuahia Mission Field of the Living Word Ministries Int’l- Pastor Sunny Isado- explained how and why it was necessary for the Goshen Church to be born, in that Ossah Community is the home of the President. He also revealed that the planning for the planting of the church had gone with the President’s full participation and guidance. In his words: “In my 25 years of pasturing under Living Word Ministries, I have never gone for a meeting and things are done in hush tones. Here you have freedom to exercise your grace. You can grow as an usher, worshipper and become a pastor. It is the grace of God at work upon your life that makes a way for you in Living Word Ministries. Today, I am more joyful that I am alive and history is been made with the planting of another branch of the Living Word Ministry in the hometown of the President.” Pastor Sunny in turn invites the Senior Pastor of Greater Love Region (Aba)― Pastor Mike Praise― who reeled out the numerous landmarks of the visionary President of the Living Word Ministries Int’l. Pastor Mike Praise sang of the grace of God at work in the life of the President from the establishment of the Living Word Academy and the Magnet Schools to the institution of Rhema University which recently acquired her permanent license of operation as a Private University from the National University Commission (NUC). He gave more details from the founding of the Living Word Mission (Multi Super-Specialist) Hospital to the start of the flourishing Living Word Print Media; from the creation of a blooming radio station― Rhema 93.3FM― to the countless testimonies and miracles God has worked and is working through Bro Emma Okorie since becoming the President of Living Word Ministries― an apostolic church headquartered at Aba with outpost churches in the United States of America, United Kingdom, Germany, Poland, South Africa, Togo and several states in Nigeria. All this can only be evidence of the strong anointing upon a man yielded to the propagation of the Kingdom of God. 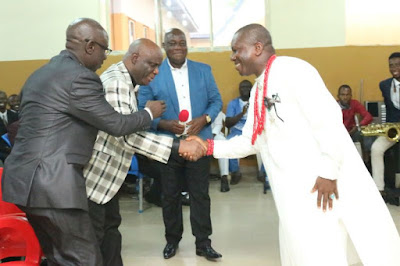 The offerings are taken and Pastor Sunny lauds the President to the pulpit of his message. The President, Bro Emma Okorie, spends the first few minutes of his message acknowledging the presence of long time friends and brothers: the Eze Chiabuotu Emenike of Ossah Community and Eze Chime amongst others. He went on to tell the people a detailed story about his conversion to Christianity, his growth in his personal relationship with Christ and blamed Salvation as the foundation of all the exploits God works through him. He spoke on “I was such a terror in my community that my father who was a powerful preacher regretted having failed to make me follow in his steps. When I was to accept Jesus Christ in my secondary school days, I demanded from the preacher, Mr Ephraim, a sign that God could forgive all my bad and after his prayer I felt peace well down in my spirit. The excitement was overwhelming. My father noticed it after a while and later I apologized to him for all the headaches I had been giving all the while. I bought myself the Revised Standard Version of the Bible and would study long hours to know more about God. My life took a turnaround and I stopped answering the nicknames people called me because of my bully lifestyle. All that thrilled me was all about righteousness, holiness and staying earnestly yielded to God.”

He narrated having learnt good Christian attitudes from Bill Roberts and how to prepare outlines for easy evangelism; and how the white preacher would send him and his friends out to preach and how they would often return with testimonies to a Mr Roberts who would have already cooked a good meal in wait of their return at his house in Mission Hill, Aba. “All of us taught by Bill Roberts are today strong preachers of the word of God”, Bro Emma enthused. He also narrated how he was empowered by the Holy Spirit to lead his Principal, Vice-Principal, teachers and a whole lot of student at Wilcox Grammar Schol, Umuahia to Christ; organize crusades and invite renowned preachers like Otabil Mensah to come teach with God using them all to perform jaw-dropping signs and wonders, including raising the dead. Glory to God. He added, “Most times, we had no money, but anointing always put food on our table. I got my visa endorsed by supernatural assistance from a man name Mark who I cannot identify today”

In closing he said, “To cut the long story short, I am saved by grace through faith, not by my power lest I boast. You don’t progress in life because you joined any church- not a Catholic, Methodist, Presbyterian, Apostolic or a Cherubim church. It is not even because you joined Living Word Ministries. Progress in life will forever remain a product of a personal encounter with Jesus.” 35 persons responded to the following alter call with the President leading them to Christ, assuring them of access to him anytime if they so pleased.

The Pastor of the Goshen Church, Pastor Obi Chianakwalam was officially presented to the congregation by the President himself Pastor Sunny Isado announcing Pastor Okey Okorie as the Assistant Pastor. Both Pastors were anointed and dedicated to God for selfless service alongside the foundation members of the Goshen Church, but not without the Eze Chiabuotu Emenike of Ossah Community giving a vote of thanks to the President and Living Word Ministries as a whole. The Eze thanked the President for deeming it fit to come back home with a portion of the good he has traversed the world with. He enthused that the Goshen Church shall be for all in Ossah a home church beginning with himself. In his words, “This seed you have sown here today will spring for you an exceedingly abundant return.” Pastor Chris Agu was invited to say the closing prayer, and once done, the people dispersed to bring news across the community of what good has come to stay in Ossah Community.
Gist RELIGION