'Not my president, not today!' Thousands in U.S take to the streets to protest against Donald Trump (Photos)

on November 10, 2016
It is no longer news that Donald Trump trumped Hillary Clinton to win the United States of America presidential election. While Hillary has gone ahead to concede defeat and congratulate him, most of her pro supporters has not taken it down well and has taken to the streets to protest. 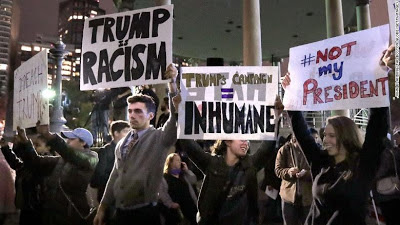 According to the U.S Police, as much as 5000 pro-Hillary supporters took to the streets across the U.S and the White House on Wednesday night to protest against the election of Billionaire business man Donald Trump as the next president of America.

Some protesters who also marched to Trump Towers, New York, including Lady Gaga on Wednesday night, yelled about issues such as immigration and other controversial topics from the Republican party campaign.

"Not my President, not today," many across the White House yelled.

"It's been really frustrating, because as a nation we thought we had come so far but it seems like we're taking many steps back," another woman at Trump Towers said to CNN. So we want to come together to change that and make sure we keep going forward."

In Portland, Pro-Hillary supporters chanted "No Trump, no KKK, no fascist USA" While Protesters in D.C., who headed to the Trump International Hotel, shouted "No Trump, no KKK''
While Latinos marched in their thousands to the Los Angeles City Hall Wednesday night and chanted

"I will not live in fear," "Fight back, stand up" and "¡Si se puede!" (Spanish for "It can be done"). People are furious not just at the results of the election, but the rhetoric of Donald Trump," Ahmed Kanna, an organizer for Social Alternative Berkeley, told CNN's Don Lemon.

Some people even gathered at the White house to mourn the election loss of Hillary Clinton as any feared their friends and loved ones could be deported once Trump becomes president. 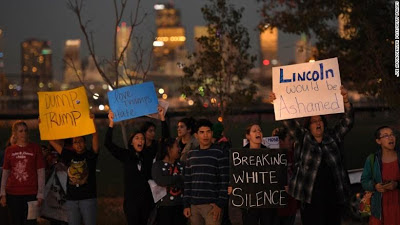 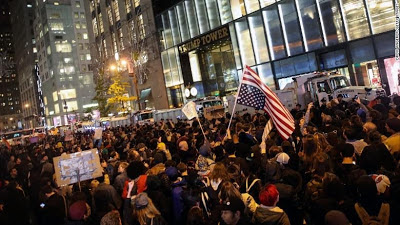 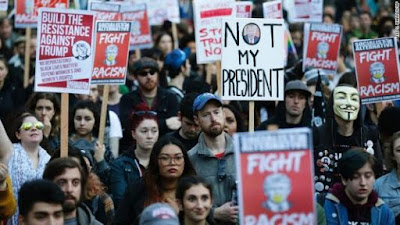