on November 17, 2016
Ik Anyanwu urges South East youths to be agents of Change as Arise Afrika is Unveiled 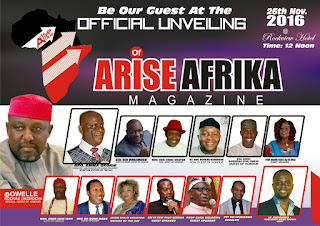 The leadership blogger, event / media Consultant  and Human Resources Specialist, made the call during Imo at 40 commemorative Lecture held at Concorde Hotel Owerri. He called on the
youths to become self reliant instead of  looking for white collar jobs. This is coming at the heels of the official launch of Arise Afrika Magazine which would be unveiled on the 26th of  November at Rock View Hotel as w
youths from the south east has lend their support towards the success of the event which will be attracting participation of high profile guests, from across the south east.