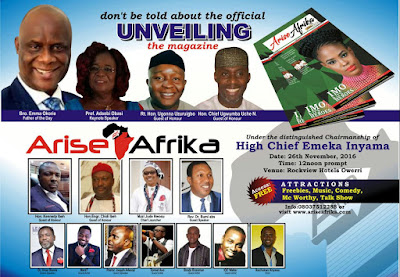 The leadership blogger, event / media Consultant  and Human Resources Specialist  who made the call during Imo @ 40 commemorative Lecture held at Concorde Hotel has urged the youths that instead of looking for white collar jobs to become self reliant.
“I believe in the youths, that we can help bring the desired change we are all seeking for in the country.”


Earlier the group has intimidated us of their intentions to raise the beautiful continent of Afrika one information at a time. He revealed that their would be unveiling of Arise Afrika Magazine on the 26th November at Rock View Hotel of which  several youths has lend their support towards the success of the event which is attracting participation of high profile guests.
He called on involvement of youths and not to feel alienated by severe economic conditions. There
would also be a brain storming session at the event, along side cultural exhibitions, African Fashion show, Comedy, Talk show,
Apart from the young people looking forward to this event, a foremost successfully  business woman and investor -  Ugoeze Ngozi Okwudinma has strongly voiced out her support to the youths. She advocated youths making use of their MIND POWER FOR RELEVANCE . According to her;


"Train and empower your mind right. See yourself as the only architect of your dream after God. Be law abiding. Improve yourself academically and aspire to achieve great things. Work hard. Acquire practical skills that would help you in life. It would also help to prepare and package you as a potential leader for the nation.

To the older generation I say, see yourself as a catalyst positioned by posterity to help people achieve their dreams. Assist the youths to achieve success. We should all see ourselves as one part of the whole universe. Everything we do, say or has done has effect on the whole universe. when this becomes our mindset, we will find out that It is easier to help change the world and also convince others to do the same.

In conclusion, no matter how well meaning the society or Government policies are, you can not achieve much for yourself unless your mind stays sound and focused. you must be objective, constructive, faithful, diligent, loyal, honest and have confidence in yourself.

You must be willing to sacrifice a little bit to reap bountiful thereafter. That is the secret. it worked for me and it can work for you. You must understand that there is no other smoother way for you to reach the top and achieve success in life than the above.

I believe in the youths. I believe in myself that is why I am here today" -     Ugoeze Shirley Ngozi OKWUDIMMA

The above statements were made by her at  Imo community development project capped" Imo Students Leadership Summit 2016 " organized by Arise Afrika in partnership with Bureau of Students Affairs Imo State Govt House & Zanders Fm.

Another time of impartation is around the corner. This time @ Official Unveiling of Arise Afrika.


Civil Society groups  Partners too for the Unveiling of Arise Afrika Magazine.
on 26th of November  2016 in Owerri Nigeria, a  public lecture would be held as Arise Afrka Magazine is unveiled to the general public. A civic gathering that will feature technocrats, educationist, captains of industries, civil society leaders , opinion molders and the general society in a discussion that will elaborate on the need of inculcating self-sustaining ability, positivism in our daily activity as ways of strengthening  Nigeria's future will be taking place.

The pivotal South Eastern States of Imo and Anambra turned 40  in February  this year and thus presented an ample opportunity for Imo @ 40 commemorative lecture in Imo which reflected on what the future holds for Nigeria as a united nation regardless of its  regional tensions, like Boko Haram in the Northeast, Niger -delta militancy in the south-south and Biafra agitations in the south east.

Details of the lecture on the theme: Analysing the future of south east socio-political persuasion in todays Nigeria; the way forward will be on Arise Afrika Magazine amongst other thrilling lectures, Photo news of events across the nations.

The 2015 elections that brought a change in government, increased the positive surge in political consciousness of usually non-partisan youths and adult and must be effectively taken advantage of in propagating civic education in the populace and all the lectures presented an ample opportunity for soul search and reflections on the issues limiting the south east socio-political development and stratagems to conquer salutation of mediocrity in the zone.

The south east was chosen for discussion because of the occasional volatile demonstration and agitation for a sovereign state that has led to the loss of precious lives and huge economic losses and the organisers  in living to their promise to the people are using the  outcome of the lectures and discussion to analyze the situation, educate and inform its people especially the youth on the right direction to take as more demonstrations are expected in the near future.

The team of organizers putting the event together is counting on participation of their chosen professionals with indelible records, who are also recognized voices with  deep  intellectual capacity and record that commands  inter- tribal followership of Nigerians as a pedestal to help drive the point home.
IT’S INFORMATIVE, IT'S EDUCATIVE, IT'S GLAMOUROUZ!!