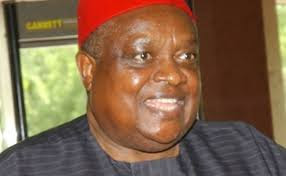 "Owelle, I have not been to this Imo International Conference Centre before. This is a wonderful edifice."

"I congratulate you. I have worked with you in PDP, you now in APC, I have refused to join the band of those who castigate their brothers."

"No matter what anybody thinks, someone has been elected as President of Nigeria, and he has a four-year mandate. Same applies to Imo State. What we can do is to support them."

"You are our eyes in the Presidency, and when I want to know what is happening in the system, I always call on you."

"Nkechi Rochas Okorocha, I met you in 1992 when I was campaigning for Presidency and you your husband Owelle hosted me to a sumptuous meal in your home in Jos. Ever since then, we have enjoyed a wonderful relationship and you know I respect you a lot."

"At every point in history, God raises one person at a time of Change. This is a time of Change, and God has raised Nkechi Okorocha, and we will support her effort. Just like the Beijing conference, we want this to be name Owerri conference and use it as an opportunity to make categorical statements about the situation of igboland and how we will get what is due to us from the Federal Government."