The naira plunged to 418 against the dollar at the parallel market on Tuesday as scarcity of foreign exchange continued to weigh on the official interbank and black market. 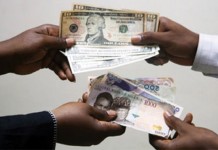 The local currency, which closed at 414 against the greenback on Monday, traded at 415 in Lagos, 417 in Abuja and 418 in Kano, foreign exchange dealers said.

Foreign exchange analysts believe the lingering scarcity of forex has been exacerbated by the banning of eight commercial banks from the forex market by the Central Bank of Nigeria.


The United Bank for Africa Plc, one of the nine lenders, was later re-admitted after it remitted its share of the funds to the TSA.

A day after the CBN banned the nine banks from the forex market, the local currency depreciated to 402/dollar, down from 397 it closed against the greenback on Tuesday.

The local currency has continued to depreciate gradually. Forex dealers maintained that the demand pressure on the dollar, mounted by summer travellers and parents paying schools fees of their children studying overseas ahead of resumption in September, was exacerbated by the CBN’s forex ban on the nine lenders.

The naira, which hit a fresh record low since the CBN floated the currency on the official interbank market in June, first touched 400/dollar at the black market this month.

Meanwhile, the CBN sold around $1.5m at the interbank forex market on Tuesday to support the local currency and ensure the closing rate stabilised, Reuters reported, quoting currency traders.

The naira closed at 305.50 to the dollar on the interbank market, same level it had traded since last week, having touched 325.50 a dollar intraday, but gained after the CBN’s intervention.

Traders said the naira had consistently closed around 305.5 to the dollar since August 22, an indication that the CBN was concerned about a particular price range for the local currency.

On Monday, the forex market registered $327m worth of trades, about six times more than its usual volume.

Average trading is around $50m a day on normal days; it may reach $100m on days the CBN intervenes in the currency market.

According to traders, dollar shortage remains a major concern in the market even with the daily intervention by the central bank and a pocket of flows from offshore investors.

The naira traded at a fresh record low of 418 to the dollar on the black market, against 414 a dollar on Monday, traders said.

It's fun to comments and share. We love comments!!!