Say No to Campus Cult: It's all pains no gain! by Anyanwu Ikechukwu

on August 28, 2016
REFLECTIONS:  Campus Cult: It's all pains no gain! by Anyanwu Ikechukwu

It is no longer news that a young man who saw the beginning of this month of August isn't here with us to witness this day. He meet his untimely death as a result of the subject above. This is why am reflecting on this today. Students.. Pls SAY NO TO CULT - 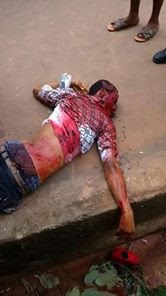 One of the greatest social crimes committed in the institution of higher learning in the country as of today is cultism. It is a social crime which is rampant in universities, colleges of education and polytechnics all over the country. It is a social menace which is a common phenomenon that characterizes the entire society: the secondary schools are not unaffected and this is most unfortunate, as it is corruption from the grassroots. Getting involved will be all pains, no gain. The whole of your life will be war, war war. Problems here and there with other cult rivals. you will not be spared of the bizarre intimidation and molestation on and off the campus.

Back then in 1999 our universities were hot zones which lead President Obasanjo to declare war on cultism. life offered me opportunity to lead this fight.

We were at the fore front of spiritual reformation of ex-cultist on campus. we "counted ourselves worthless to save the lost" and had a different approach/strategy on fighting campus cult: making it clear that the fight against cultism was a spiritual one and cannot be fought with a canal weapon. our spiritual approach includes: prayers, evangelism, anti-cult crusades where repented cult members openly shared their testimonies after which we held expository talks on cultism.
We took this expository gospel to initiation grounds and passionately pleaded to our fellow students to give their lives to Christ. We had nothing to do with unfruitful works of darkness but expose it. We beckoned on our youths to steer them away from negative influences, to SAY No To Cult. We took a spiritual approval in fighting cult because the supernatural controls the physical. Every cult group has a god they covenant with via the oath taking during the initiation by the blood. be it 'korofo' 'ducanbrown' 'odin' .
The life of everything is in the blood. But I am happy to introduce the blood that can speak of better things... The Blood of Jesus can break the satanic yoke of cultism. 'If the son of man set you free, you are free indeed' You can denounce your membership of cult. you can open up and seek a way out. You know the real reason your results have not been impressive. Friends, it's all pains at the end . There is a way that seems right to a man but the end is destruction. Have a rethink. the number of wasted years. many has lost their lives in the useless quest, some others maimed, some ended up in prison.