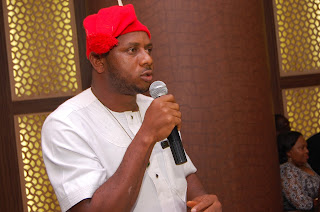 Nigeria cannot continue to practice this skewed unitary “feeding bottle” federalism. The change that Nigeria desires is not a change of politicians nor political party, it is a structural change.
Until this is done, we shall continue to have the experience of ‘the more things change, the more they remain the same or get worse’… True fiscal federalism is the solution and the APC led Federal Government has a moral, legal and patriotic obligation to make this happen.

In April 2012, the present Governor of Kaduna State, Nasir Ahmad El-Rufai, published an article title “A Federation without Federalism”.
In this article, El-Rufai gave a passionate and critical review of the skewed unitary federalism which Nigeria practices and advocated that the structure of Nigeria federalism is faulty and should therefore be restructures into a fiscal federalism to allow the states (or regions as the case maybe) compete among themselves so as to divide a productive, fair, efficient and sustainable Nigeria.

Part of the argument put forward by El-Rufai, was the need to revisit the 1963 constitution and decentralize power to enhance fiscal responsibilities to the governments closest to the people. Like he rightly said in that article, “from one perspective, there might be a  nexus between our anomalous federal structure and the lack of accountability, particularly at the state and local  government levels. If we reflect on our distant past, the 1963 Republican Constitution was close to an ideal federal structure, with clear guidelines on how the Nigerian federation and the federating units were to be financed without undue reliance of one on the other.

Unlike the 1979 Presidential Constitution and its successors, including the current 1999 version, the 1963 Constitution set clear parameters for territorial and fiscal federalism and carefully avoided undue centralization. For instance, section 140(1) (a) & (b) of the 1963 Constitution foreclosed any agitations in the guise of ‘resource control” While all minerals- solid or liquid –remain unequivocally the property of the government of the federation, the Constitution provided thus: “There shall be paid by the Federation to each region a sum equal to fifty percent of – the proceeds of any royalty received by the Federation from within that Region … In reciprocal terms, the regions were contributing towards the costs of administration of the federal government at the center in the proportion of what they received as their own share of proceeds of export, import and excise duties collected in each region by the region on behalf of the government at the centre . In the case of oil production, the same applied with the unforeseen exception that the federation will go into joint ventures and production sharing contracts that bring in revenues other than rents, royalties and taxes.

This system was maintained until the circumstances of the civil war changed it radically in favour of retention of most of the revenues by the center, in order to prosecute the war. Things have never the same since then”

TO BE CONTD …….
(Dr MacGinger Ibeneme is a Medical doctor. one of the young medical doctors that God used to fight Ebola. He is an advocate of Social Justice, a Political Pundit and part of the Resource persons at the event organized by Nigerian Eye Newspaper & GCFN Consult - publishers of Arise Afrika