Former Nigeria captain Austin Jay Jay Okocha has said he is overwhelmed by the eulogy poured on him by England coach Sam Allardyce despite retiring from football many years ago. 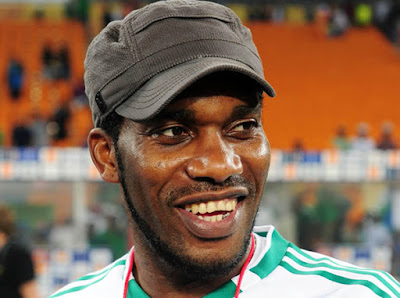 On Tuesday, Allardyce retained Wayne Rooney as England captain and encouraged him to follow Jay Jay Okocha’s example. Rooney was told to continue in his role as England captain – by following the leadership blueprint of  Okocha who also played as Allardyce captain while at Bolton Wanderers.

The Independent quoted Allardyce, “On and off the field, Jay Jay was the captain you looked for.

“In a multi-national side from all over the world, he could speak four different languages and communicate very well with some of the players who couldn’t speak quite as good English.

“He sorted the odd scuffle out in the dressing room, talked to the players about how we had to go out and win. He’d take the manager’s instructions and apply them in the right way.

“Then there was outstanding ability on the field, leading by example and showing everybody he wasn’t a mercenary which was suggested in the beginning, that he’d only come for the money.”

Okocha, who was unaware of the Allardyce comment until The PUNCH called him, said he was overwhelmed to be so remembered by his former manager.

He said, “His comments make me feel so good and fulfilled. Sometimes we do things the way we know best without knowing how well and far it goes with other persons. I was just working the way I felt the work should be done; I never knew it made his (Allardyce) work easier too.

“I am proud of what I achieved at Bolton and in football.”

The former Super Eagles captain also had kind words for his manager at Bolton many years ago in the English Premier League.

According to Punch news Okocha said, “He was a good manager. He knows how to get the best out of his players. You could see what happened to Newcastle after he left there. He’s really a good coach and deserves the England job. His appointment didn’t come as a surprise to me.”

Okocha with the likes of Jussi Jaaskelainen, Hernan Crespo and Youri Djorkaeff made the EPL low-budget team quite formidable even against the top-four teams. They were one of the teams to always look out for in cup competitions.

For the England team, Rooney’s retention in the role, widely anticipated, ensures continuity for a player who broke Sir Bobby Charlton’s all-time England goal-scoring record during the qualification campaign for Euro 2016.

With 115 caps, Rooney is likely to surpass Peter Shilton’s all-time appearance record in the run-up to Russia 2018 and Allardyce insists that sticking with the player as captain was an “easy” choice.

“Wayne has been an excellent captain for England and the manner in which he has fulfilled the role made it an easy decision for me to ask him to continue,” he said.
It's fun to comments and share. We love comments!!!