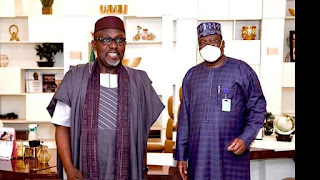 -Initiates RochasCare National Youth Data Base For the Unemployed

The President Rochas Foundation International,His Excellency Rochas Okorocha has declared University Scholarships for 58 intelligent and most performing students who have distinguished themselves in the annual Joint Admissions & Matriculation Board Exams in Nigeria as he turns 58yrs on September 22,2020.

Okorocha made the announcement when he played host to the Senate President,Senator Ahmed Lawan in his Office at Unity House,Abuja Thursday.

On the RochasCare National Youth Data Base Program,Okorocha says it is high time the nation developed comprehensive statistics of the unemployed youths in the country in order that would help actualize President Muhammadu Buhari’s vision of “taking One hundred Million Nigerians Out Of Poverty”.

The Former Governor of IMO state says the initiative is part of activities to mark his 58yrs birthday whereby funds has been earmarked in support of the beneficiaries to be selected from the 36 states of Nigeria including the FCT.