OWELLE @ 58: THE WORLD STANDS STILL FOR THE VISIONS OF AN ICONIC HUMANITARIAN 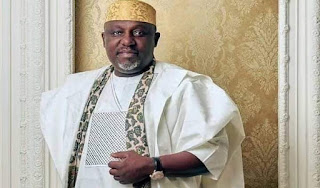 OWELLE @ 58: THE WORLD STANDS STILL FOR THE VISIONS OF AN ICONIC HUMANITARIAN BYO FCC JONES ONWUASOANYA

Owelle Rochas Okorocha has seen success in business, in politics, in family and he is reputed to have that touch of Grace, which turns everything he touches into gold. Three times, a no-push-over presidential aspirant, a former federal commissioner, a former presidential adviser, one of those who set the foundations for our democracy through his participation in the National Constitutional Conference, a former Chairman of the National Aviation Management Agency, a former governor and a serving Senator of the Federal Republic of Nigeria. One could say without any iota of doubt, that the little boy, born under a tree of spirits in his village's local market, and by parents who struggled to feed, but never failed to love, is indeed, a fulfilled man. But, when you listen to him, you wouldn't, but conclude that the man is still unsatisfied, not with wealth, nor with political power, but that one thing, that drives him; vision for a more egalitarian society.

It is this vision, encapsulated in the foregoing statement that has most won the Ogboko born self-made multibillionaire investor, accolades from across the world, from friends, as well as rivals. Okorocha has been so faithful to his visions that it would be impossible for anyone, no matter the bike, he harbors, to deny his success in impacting on the lives of the people.

Owelle Rochas Okorocha has won the heart of the world, not with money, but with love, not with power, but with compassion, not with brain, but with grace, not with show, but with ideas. The world is captivated by his visions for a better world and every good person who has followed his humanitarian trajectory over the last three decades, is held spellbound by the proof he provides that one can serve God best, by helping humanity. Like Ugwumba Uche Nwosu said in his tribute to him, Owelle has shown and lived to prove that; "humanity would be better served with love than with power."

In the many goodwill messages that he has received at his 58th birthday commemoration from friends, associates, mentees and colleagues, one line has remained constant; his vision for humanity is the most captivating quality that draws enormous goodwill to him. Like President Muhammadu Buhari noted; "Okorocha's large heart and detribalised outlook on the country will continue to stand him out for recognition and appreciation." And Africa's first ever elected female president, Ellen Sirleaf Johnson expresses her joy and admiration for the man's vision to make the world a more peaceful place through his investments in the education of the less privileged children in Africa.

As we celebrate this exceptional African leader and icon of humanitarian interventions, may we draw inspiration from his life and look for better ways to serve humanity, genuinely with whatever God has given us.

A very fulfilling 58th birth anniversary to one of the most inspirational leaders Africa has seen.