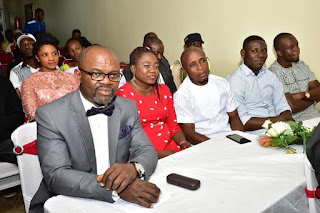 The presenter and moderator of the IMO Broadcasting Corporation's (IBC) Owerri flagship program, "In Focus" Mr Jerry Osuji has been honoured with a merit Award of "  Media Personality of The Year" by Arise Africa Magazine 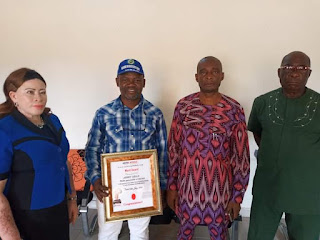 Presenting the Award in the office of the Acting Director General of IBC, the Publisher of Arise Africa Magazine, Mr Ikechukwu Anyanwu said the award was in recognition of Mr Osuji's vision, enterprise and contributions to broadcast industry and youth development.

"On behalf of Arise Africa Magazine, I am here to present this Award to Comr. Jerry Osuji. Congratulations to IBC, and Mr Jerry Osuji winner of Media Personality Award from Imo Broadcasting Corporation

"We commend IBC for high level of professionalism you have exhibited over the years, no wonder your staff are blazing the trail everywhere they are. They are sharing global best practices and raising the Beautiful Continent of Africa, one information at a time"

Mr Anyanwu also noted that the Orient FM interview program "IN FOCUS" has not only linked the people with the government but also catapulted the IBC to the international scemce since it is streamed live on all social platforms and received globally. He then lauded Mr Osuji for his ingenuity and talent.

The Head, Business Enterprise in the IBC, Mrs Joy Okochi, thanked the Arise Africa Magazine Publisher for the Award and hope the award would serve as a motivation as well as encourage hard work in the IBC

Clutching his Award close to his chest, Mr Jerry Osuji expressed delight at the gesture and dedicated it to the Management and staff of the IBC for their encouragement and support which earned him the award.