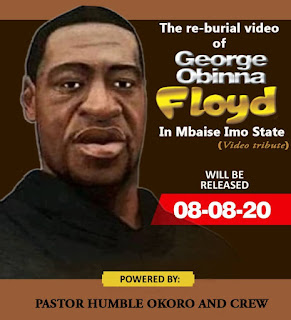 Few days ago a set of pictures went viral pertaining to the re burial of George Floyd in Mbaise which controversially was said to have conducted by  pastor humble. The said pictures which trended in different social media handles was equally reported by BBC,Wazobia radio, Linda ikeji blog, instablog and other blogs, including a whole lot of radio channels and news tabloids.

In fresh news, the Mbaise blog media team had a one on one chat with pastor humble in his Owerri office. Pastor humble attested to the originality of the pictures and in fact asserted that there are videos to ascertain this reburial. He said the video will be made available on Saturday the 8th of august at about 10am on the Mbaise blog Youtube channel and Facebook page. He said the reburial/Musical video tribute to George Floyd  and everything about it is all connected to the fight against racism, show respect to our own and support the black lives matter campaign.

George Floyd who died from US police brutality may be dead and buried, but not for Humble Okoro, a Nigerian Pastor.
Floyd was born in Fayetteville, North Carolina, and raised in the Third Ward of Houston, Texas. In 2014, he moved to Minneapolis, Minnesota.

On May 25, 2020, Derek Chauvin, a white police officer, knelt on Floyd’s neck for almost eight minutes while he was handcuffed and lying face down, begging for his life and repeatedly saying “I can’t breathe”.

During the final two minutes, Floyd was motionless and had no pulse while Chauvin ignored onlookers’ pleas to remove his knee, which he did not do until medics told him to.
ENTERTAINMENT Gist NEWS