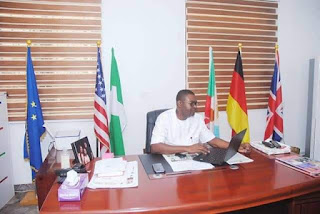 Dr. Ihekweme this morning in his Odenigbo Government House Office while recounting the giant strides of the Digital Governor of Imo State, extolled the Governor’s Leadership qualities and stated that  Hope For Imo people has finally come.

The Distinguished Commissioner for Foreign/International Affairs disclosed that Governor Uzodinma, possesses the qualities to Rehabilitate, Reconstruct and Recover the State. He said that with Gov. Uzodinma at the helm of affairs of the State, there is hope for a new and Modern Imo State. There is hope and new beginning for Imo people with the quality of leadership he has provided.

Dr. Ihekweme said, "I believe that God who made him Governor of Imo State has given him  the Knowledge, Wisdom and foresight to do the needful things to make Imo State  one of the leading States in the country. His Excellency Governor Hope Uzodinma has employed his wealth of knowledge, experience, legislative ingenuity and extensive contact to the service of Imo State and Nigeria at large.

Continuing, Dr. Ihekweme stated, “We have a Governor who is humble, experienced, patriotic, loving, passionate and pragmatic. Gov. Uzodinma is only committed to good governance and total reconstruction of the state to make it fit into the league of Civilized states and make Imo people proud.

Dr. Ihekweme noted that, In Governor Uzodinma's government, you have former Presidential Candidate, Governorship candidates, National and State Lawmakers, INEC Chairman and other accomplished Imolites in their Professional fields of endeavor, serving as appointees and head of various committees. Governor Hope Uzodinma’s administration is on track in transforming Imo State and his efforts are already yielding significant results.

Dr. Ihekweme expressed happiness that Governor Uzodinma will not disappointed Imo people, stating that this administration is focused to fulfill its promises to the people of Imo State. He urged Imo people to continue to support the Governor of the state as he has come to alleviate the sufferings of Imo people.