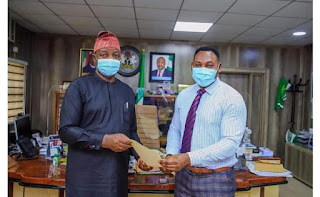 Da Bull as he was fondly called, who hails from Benue State to limelight in 1990 as a 17year old Super Eagles player to the 1990 African Cup of Nations hosted by Algeria otherwise named ALGIERS '90.

A tournament in which the Super Eagles got to the final, loosing 0-1 to the hosts after an initial 5-1 by the hosts in the opening game.

Amokachi was to play in the 1992 edition hosted by Senegal in which the Super Eagles came third after loosing 1-2 to the Black Stars of Ghana in the semi-final.

Tunisia '94 in which they won the trophy.

USA '94 World Cup and the 2000 edition of the African Cup of Nations co-hosted by Nigeria/Ghana in which the Eagles lost to Cameroun in the final match played in Lagos.

It was at this 2000 edition of AFCON that Coach Jo Bonfere displaced Dan Amokachi from the Captains band for his preferred choice of Sunday Oliseh!

Da Bull whom Clemence Westerhof nicknamed "Amotaxi" was to make International headlines when EVERTON paid a whooping #3 pounds transfer fee to Club Brugge of Belgium in the 1994/1995 seasom.

He was to prematurely retire from Soccer in 2002 due a nagging knee injury.

He was in the coaching team of Nigeria Under-23 DREAM TEAM to the 2003 ALL AFRICA GAMES hosted by Nigeria.

He also assisted Stephen Keshi in 2014 home based African Nations Cup in same South Africa in which the Eagles came third.

His appointment letter which was signed by the Secretary of the Government of the Federation (SGF) Boss Mustapha has been handed over to him by the Minister of Sports Sunday Dayo.
NEWS POLITICS