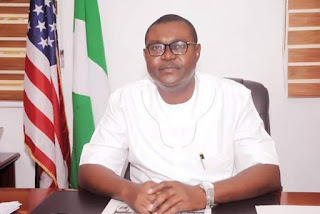 Dr. Fabian Ihekweme the  Commissioner for Foreign/International Affairs has stated that Genuine Pensioners in Imo State will be paid.

He Stated this in a chat today while interacting with Imolites earlier this morning.

"I appreciate your concerns my brother Austin Anyanwu but the truth remains that, this government will never succumb to pressure and thereby paying fraudsters. Over 60% pension payroll is fraudulent. Even pensioners that died 30 years ago are still in the payroll. What a shade!. Ihedioha didn't pay pensioners for nearly 5 months yet not even a single one of them stormed out to protest. I swear, if we catch those hired mercenaries again masquerading as pensioners, they will be ruthlessly dealt with. We will not allow partisanship to erode our resolve to clean up the system. We can't continue with this business as usual mentality. Genuine Pensioners will surely be paid and that will be done after we must have thoroughly interrogated the payroll and successfully removed the fake ones from the list.

The procedure for payment is in the offing, and as soon as we are done with due scrutiny, payments will commence in good time.

The digital Governor of Imo state, Sen. Hope Uzodinma is a compassionate leader given to us by God. We should support him to bequeath a functional and viable state to the next generation. It is not about party politics, it is about the future of our children and children children. Those that are still blackmailing this government will be put to shame in the fullness of time.
IMO State POLITICS