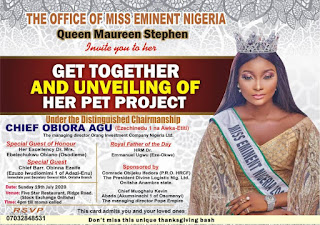 Dr. Obiano who will be attending as the Special Guest of Honour, will be joined by the MD of Orang Investment Nig. Ltd, Chief Obiora Agu, (Ezechinedu 1 na Akwa-Etiti) as the chairman of the occasion, while the special guest will be Chief Barr. Obinna Ezeife (Ezuzo Iwudiomimi 1 of Ada-Emu).

According to Queen Jurka, the event will be a rare privilege for her to stand before great minds with track records of outstanding achievements.

While keeping the name of the pet project in the bag, she said, “that’s is the reason for the unveiling ceremony, but be assured it will be something great, something that will not only change lives, but build people that will be set on the path of greatness in our generation”

On the array of dignitaries billed for the event, Queen Maureen Stephen Jurka said, “I’d say it is grace, God led me to them and I must say they are great people and it will be a great privilege having them at the event”

“Aside their outstanding achievements, they have all invested a great deal in human capital development. Their activities are beyond that of a philanthropist, they think and implement projects that have changed a lot of lives and  knowing that I will be partnering with them puts me close to the big shoes they keep expanding everyday”

The event slated for Sunday July 19, 2020 at  Five Star Restaurant, Ridge Road (Stock Exchange) Onitsha, Anambra State, will be kicking off by 4:00pm, with HRM Dr. Emmanuel Ugwu (Eze Okwe) as the royal father of the day.