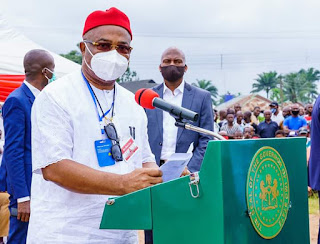 Executive Governor of Imo State, Dist. Senator Hope Uzodimma has set in motion the process of integrating Imo Pensioners into the National Contributory Pensions Scheme as a way of enhancing good governance.

Governor Uzodimma gave this indication on Friday in a meeting with the leadership of Nigerian Union of Pensioners (NUP) in Imo State at the Executive Council Chambers Government House Owerri. During the meeting he informed that everything concerning pensions and salary of Imo workers have been automated to make day-to-day running of Government easy.

The Governor reiterated his earlier stand that pensions and salaries are not negotiable, insisting that what has brought the delay in payment is the discovery of overwhelming fraud, discrepancies and irregularities resulting from salary padding, over bloated and double pensions among other sharp practices that include, where some pensioners receiving monies above their retirement salaries and some even outrageous monies that are not accounted for.

Expressing bitterness over the development, the governor said soon names of those who earn above N330m (three hundred and thirty million Naira) per annum as pension will be published for Imo people to know.

“Government will no more make use of micro finance banks for payments of salaries and pensions because they are no clearing house for BVN holders,” the governor said and reassured that the government has decided to pay pensioners directly.

By the discoveries as presented to the leadership of pensioners and NLC Chairman who was in attendance, the Governor informed that out of 13,800 primary school teachers, only 9,000 are found to be real and that only primary and secondary school teachers who have been verified and confirmed to be employees of government will receive their salaries.

The Governor advised those playing politics with pensions and salaries to desist from doing so as his sole objective has remained to dismantle the cabal that milk the state dry through the pensions and salaries. “Government has decided to automate all payments to enable it migrate to the contributory pension’s scheme.”

In their presentations earlier, the chairman of Nigeria Labour Congress, Comrade Austin Chilakpu eulogized the efforts so far made by the Governor towards payment of salaries and pensions in the State. He however appealed to the Governor to look into the staggering nature of salary pensions and illegal deductions and requested that pensioners pay be made a priority.

Also speaking, the Chairman of Nigeria Union of Pensioners, Imo State, Dr.Josiah B Ugochukwu requested the Governor to pay the pensioners harmoniously so that the leaders will be sure of those that received their pensions and others that were genuinely omitted for proper pension administration.

He apologized, on behalf of their perceived members who carried out peaceful protest against the State Government, describing it as an embarrassment that will never happen again.

Present at the meeting were the Deputy Governor of Imo State, Prof. Placid Njoku, the Secretary to the State Government, Chief Comas Iwu, the Chief of Staff Government House, Bar. Nnamdi Anyaehie and other members of the State Executive Council as well as the leadership of NUP Imo State.

CPS/Media Adviser to the Executive Governor of Imo State.