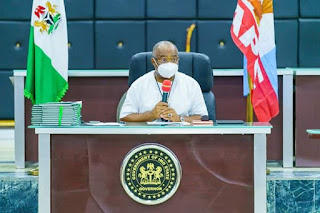 Imo State Governor, Senator Hope Uzodinma on Friday, June 5, recorded another feat that will spur growth and development when he signed into law, two Bills: Licensing and Control of Oil Mills in Imo State and Traditional Institutions, Community Government Council and other matters thereof.


Governor Uzodinma informed that the bill on Licensing and Control of Oil Mills, when fully applied, will contribute in no small measure to the economic growth of Imo State. He said that the law will check vandalism of oil palm in Imo State, especially the Adapalm and its environs in Ohaji Egbema Local Government Area.


He emphasized that the law will checkmate the excesses of vandals who pilfer the oil palm fruits in some government owned palm plantations. He insisted that for one to establish an Oil Mill, one must register with the Ministry of Agriculture, which will demand to know the sources of the oil palm fruits that will be milled.

On the Autonomous Community, Traditional Rulers and Other Matters Law, the Governor commended the House of Assembly for being committed to passing laws that engender peace, growth and development of Imo State. He explained that the law is meant to repeal the draconian Community Government Council (CGC) law, which had made traditional rulers politicians in disguise, by allowing their leadership to campaign for votes to be elected as Chairman or Secretary.


The Governor said the new law which is a reference to the old tradition has vested on the Governor the right to appoint the Chairman and Secretary of Imo State Council of Traditional Rulers.


Also, he said the same law makes it mandatory for every traditional ruler to live within his domain and take full control of his kingdom and warned that those who are not prepared to do so must pass the Traditional Institution to their brothers or relations.
Governor Uzodimma seized the opportunity to announce that soon an Executive Bill will be forwarded to the House of Assembly on the merger and re-organization of the various Security Agencies in Imo State to bring them in tandem with the standards of security operations such as the Police, Army, and Navy.


He highlighted the fact that the State already has in place a security organ referred to as “Operation Search and Flush” and requested the traditional rulers to get themselves and their communities prepared for Community Policing. The Governor implored traditional rulers to stay more in their domain to improve drive for revenue and security for the betterment of their people.


In an interview with the media, the Speaker, Imo State House of Assembly, Rt. Hon. Chiji Collins informed that the two laws became necessary, first as a source of internally generated revenue to the State and to check excesses of those who go about cutting peoples palm fruits to enrich themselves.


Secondly, that the new law on Traditional Institutions and Community Council will engender peace in our communities, restore the powers of the State Executive (Governor) to appoint Chairman and Secretary of Imo State Council of Traditional Rulers after due consultation with the State Executive Council and other stakeholders.
IMO State NEWS POLITICS