'No worker in Imo State will, any longer, receive double salaries. The old days and ways are over' — Governor Hope Uzodinma 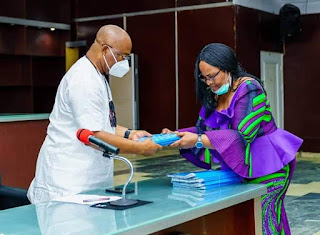 Read the full press statement by the Governor of Imo State while receiving the submission on Verification of Staff and Salaries of Unified LGA in Imo State.

The verification became necessary as a result of what was observed at the inception of our administration, where 85% of Local Government fund was spent on payment of salaries of workers with nothing more to show at the Councils by way development and developmental initiatives.

I commend the Committee for living up to the expectation of submitting the report in record time.

Going forward, the government will only pay those that have employment history and actually working.

It is also instructive to note that no amount of brigandage by any group of persons will stop the government from doing the right thing.

As a Government, we will drop as many as possible on the local government payroll that are not working for the government.

I reinstated my earlier stand on the automation of all workers' salaries in Imo State. No worker in Imo State will, any longer, receive double salaries.
The old days and ways are over and there must be sanity in the system.