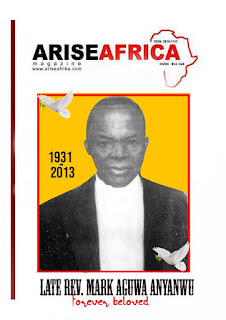 The life history of our father, the Late Reverend Mark Aguwa Anyanwu, mirrows the complexities of man in time that is in history and space or what we call environment. Thus has always taught us that the Sovereign Lord God and Creator of all reigns in the times and seasons of humanity.

Rev. Mark Aguwa Anyanwu's greatness lies in how he responded to various difficult lives challenges. His legacies endure over time. His generosity earned him the Chieftaincy title of Omefuru Onye Odiri (Helper of the needy) of the Ehumanchi Autonomous Community in Obowo before he was called into ministry.

His respect and love for all will continue to endear him to all of us. From the time of his demise hundred of callers many of whom are unknown to the family continue to describe some of his deeds of kindness. Death  took only his flesh and cannot take his faith and unrivalled benchmarks

As an Icon and a legend, Rev Mark Anyanwu will continue to be remembered. His soul like the soul of all of us will never die but lives on in eternity. His wish is that after life on the earthly body, you all here in eternity enter a well atoned for rest in heaven with the Saint Triumphant which now includes him.

Daddy daddy was loving, generous, forgiving and humble. He taught and lived by example what he believed that the Lord Jesus Christ suffered and died vicariously for all.

I have no doubt that he is now resting in the bossom of Abraham, He once told us of the revelation to him of his heavenly mansion, the splendor and glory of which cannot be compared to any palace on earth. Hr graduated from the All Nations for Christ Bible Institute founded by the late Papa Archbishop Benson Idahosa in Benin. He went from their to organize crusades, plant churches, printed and was a pioneer bill board evangelist preaching the good news that Jesus saves, heals, protects, blesses and satisfies. Rev Mark Anyanwu was a pastor to many which included pastors and was our great grandpa, Daddy Daddy and Dede. We sure miss him!

He was born on 16th August 1931 in an idolatrous era when  his brothers and sisters were killed for being twins. His mother late Diwumma Happiness was threatened to be killed if she delivered another set of twins. As the mother became pregnant for him she had to take refuge at the missionary Hospital established by Mary Slessor at Amachara in present day Abia State. His mother came back this time with one baby who was baptized and named after a Missionary Doctor Mark. The boy Mark was in the Anglican Church Choir and active youth. The man Mark met and marries another chorister Miss Rebecca Chinenyenwa Ipegbu in 1956. They were blessed with 3 boys and a girl. After the tragic demise in 1968 of his first wife, he married Miss Edith Pepple and was further blessed with one girl and 2 boys.

Rev Mark Anyanwu pioneered what is now known as village liberation by destroying shrines, charms and amulets. No wonder the safe return of all Umuakama Youths from the Biafran War proving that CHUKWUKADIA (I.e Almighty God is greater than the native doctors). Rev Mark Anyanwu helped to train and being up several people who are successful today.

The rural areas had mud huts with raffia leak roof (Ulo Akirika). In 1963 Rev Mark Anyanwu pioneered village and rural development by erecting a building complete with modern roofing, electricity, television, video and sound systems, plumbing and water systems which facilities has remained up to date 50 years  after. Rev Mark Anyanwu brought out of his gate tap giving water free of charge to the general public. Rev Mark helped train and bring up several people who are big men and women today.

To summarize a lifetime of 82 eventful years is difficult  Reverend Mark Anyanwu was born in August 16, 1931 to late Ichie Anyanwu Uhagiro and Madam Diwumma Happiness Anyanwu educated in the Onowu Central Primary School, Emmanuel College Owerri and All Nations for Christ Bible Institute. He worked in the CMS Bookshop, African and European Trading Company, Jos Hansen & Soene after which he founded and established Skyways Electronic Company.

During the Biafra war, he was a Refugee Camp Director. He worked in Fuegerolle Construction Company from where he resigned to become a politician who contested for the Imo State House of Assembly. After all this he enrolled and studied at the All Nations for Christ Bible Institute from where he graduated and became an Ordained Pastor

Plus Sisters Igamucha and Bessie, Nephews;  Nices and others

Goodbye and May your soul continue to rest in peace till we meet to part no more.
ARISE AFRIKA MAGAZINE Profile