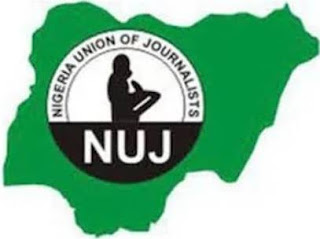 The Nigeria Union of Journalists, NUJ, Imo State chapter has disowned a recent protest by some journalists over the manhandling of one Mr.Finian Chuks.

The Union said Mr.Chuks is not a member of the Union and it never approved such protest.

A statement signed by Chairman and Secretary of the Union, Chris Akaraonye and Juliet Dim ,the protest will be investigated.

After careful investigation and deliberations at the NUJ State Executive Council (SEC) meeting, comprising chapel chairmen/secretaries and the State Executive of Imo NUJ on 4th of June, 2020 at the Press Centre Port Harcourt Road, Owerri, the leadership of the Council wishes to make the following clarifications:

That the Imo executive of NUJ was never informed about the protest and nobody obtained any permission from it to go and stage a protest for the sake of any ‘colleague’.

The said Finian Chuks is not known to the NUJ in Imo State as there is no member that bears such name in our register.

Much as we are not in support of the manhandling of any individual, no matter the level of provocation, NUJ Imo State Council wishes to let the public know that not every person that writes or posts a write up on a news media is a professionally trained journalist.

The union is an organisation open to only academically trained and qualified journalists, which is a precondition for admitting an intending member.

Not every owner of a news media (radio/TV or newspaper/magazine) is a journalist and so the public should beware of whoever they deal with as a journalist.

The NUJ hereby warns that anybody who masquerades as a journalist or a member of Imo NUJ Council to engage in protests without the knowledge of the leadership of the Union does so at his or her own risk. Such a person risks being prosecuted if apprehended.

Imo NUJ Council will investigate the said protest inorder to know if registered members of the Union were involved. Any member found to be culpable will face the Ethics and Disciplinary Committee for proper sanctions.