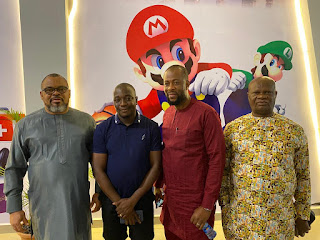 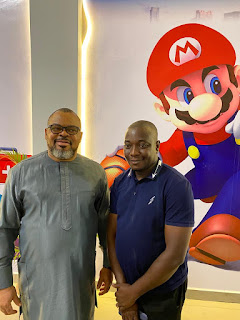 The visit was not a mere visit, as IKEOHA was not there alone, his brothers and friends formed the entourage that accompanied IKEOHA to the office at Corporate Headquarters Abuja, including Hon. Chika Okafor, the three times House of Assembly candidate of All Progressives Grand Alliance (APGA), and others.

These Obowoans led by IKEOHA GBURUGBURU, went to see their brother, the MD of TStv, to see how largest and magnificent that place is, they equally discussed on how to come in and partner with the company.

Dr. Bright Echefu, the MD, had a long discussion with IKEOHA GBURUGBURU, they discussed about his establishment, how big & wide it is now, how bigger and wider it's going to be soon, how people can come in, how the people of Obowo Local Government Area, entire Okigwe zone (6 L.G.As in Okigwe zone) Imo State, Nigeria at large, will benefit lucratively and informatively, through Telcom Satellite Television (TStv).

IKEOHA GBURUGBURU did not end the long talk with only issues concerning the TStv expansion, enlargement and benefits, he went further to discuss in versatility a lot of things that concerns the good people of Okigwe zone, as he is absolutely out to ensure that Okigwe zone will be taken to the peak, no more backwardness, stagnation or primitivism in Okigwe zone, because with IKEOHA GBURUGBURU, development in Okigwe is assured.