Buhari Swears In Prof Gambari As New Chief Of Staff. 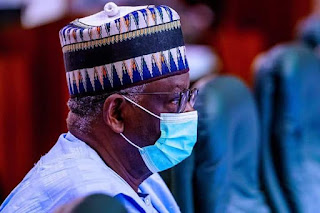 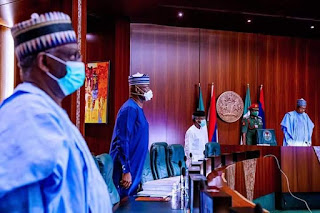 President Muhammadu Buhari has sworn in Professor Ibrahim Agboola Gambari as his new Chief of Staff.

Gambari was sworn in on Wednesday. He succeeds Mallam Abba Kyari who died recently.

Secretary to the Government of the Federation, Mr Boss Mustapha, announced the wearing shortly before the commencement of the virtual Federal Executive Council (FEC) meeting at the presidential villa.


The 76-year-old former United Nations Under-secretary General and former Member of General Affairs was on Tuesday announced as the new Chief of Staff.

Born in Ilorin Emirate of Kwara State, Nigeria, on November 24, 1944, Prof. Gambari attended Kings College, Lagos, as well as the London School of Economics where he obtained a B.Sc. (Economics) degree in Political Science with a specialty in International Relations, Professor Gambari received M.A. and Ph.D. in 1970 and 1974 respectively both in Political Science/International Relations from New York’s Columbia University.

He had a brief stint lecturing at the City University of New York and the State University of New York (Albany) in 1969-74. He returned to Nigeria where he taught at the Ahmadu Bello University in Zaria and rose to the rank of Professor in 1983. He was Head of the Department of Political Science in 1982-1983, where he founded the first undergraduate Programme in International Studies in Nigeria.

Professor Gambari was appointed Director-General of the Nigerian Institute of International Affairs in October 1983, a position he held until his appointment as the youngest ever Minister of External Affairs during Buhari/Idiagbon administration after the change of government in December 1983. He had served in various academic capacities: He was Visiting Professor at the John Hopkins School of Advanced International Studies, in Baltimore; lecturer at both Georgetown University and Howard University in Washington, D.C.; a Research Fellow at Brookings Institution, Washington, D.C and a Resident Scholar at Rockefeller Foundation Bellagio Study and Conference Centre, Italy.

Prior to joining the UN Secretariat in December 1999, Professor Ibrahim Gambari holds the record of being the longest serving Ambassador/Permanent Representative of Nigeria to the United Nations (January 1990 to October 1999). As Nigeria’s Ambassador to the UN, he was a senior member of the Nigerian Delegation to ten consecutive sessions of the General Assembly (44th to 54th); he also served as President of the Security Council on two occasions (May 1994 and October 1995).

Apart from chairing the UN Special Committee on PeaceKeeping Operations from 1990-1999, he led several United Nations missions, including the Special Committee against Apartheid and the Security Council missions to South Africa, Burundi, Rwanda and Mozambique. He served as member of the Board of Trustees of the United Nations Institute of Training and Research (UNITAR) from 1993 to 1999 and also as President of the Executive Board of UNICEF (January to December, 1999).

Professor Gambari apart from publishing articles in national and international scholarly journals, he has authored globally acclaimed books which include: Theory and Reality in Foreign Policy Decision Making, Comparative Study of Regional Economic Integration; the Case of ECOWAS and The Domestic Politics of Nigeria’s Foreign Policy. Some of his forthcoming books include Africa’s Security Questions at the End of the 20th Century into the New Millennium and The United Nations in a Changing World Order: An African Perspective.

In recognition of his distinguished diplomatic and scholarly careers, he was in 1985 became the first African to be conferred with the title of ‘Honorary Professor by Chugsan University’ which was founded by and named after Dr. Sun Yat Sen, leader of the 1911 Peasant Revolution and first President of Nationalist China. The University of Bridgeport (USA) awarded him the Doctor of Humane Letters degree (honoris causa) in 2002; the prestigious Johns Hopkins University elected him to membership of the University’s Society of Scholars in 2002 and the Government of Nigeria awarded him the national honour of Commander of the Federal Republic (CFR) in 2003. He was also honoured by various associations including the Nigerian Lawyer Association, New York in 2006.

Professor Gambari is the founder of the Savannah Centre for Diplomacy, Democracy and Development, a non-governmental “think-tank” in Abuja, which is devoted to critical analyses of – and solutions to – the problems of conflict prevention, management and resolution, as well as democratization and sustainable development in Africa.
ARISE AFRIKA MAGAZINE NEWS Nigeria POLITICS