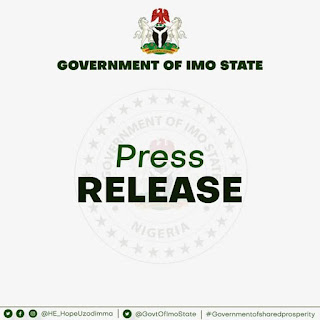 ... SAYS GOVT WON'T BE BLACKMAILED INTO DOING THE WRONG THING .

Imo state governor, Hope Uzodinma, has directed that all pensioners in the state be immediately paid their March pension allowances but warned that his government will insist on paying salaries and Pensions only to those legitimately entitled to it and not to  ghost workers or pensioners.

This was just as the Leadership of the Pensioners revealed that the use of Consultants by the sacked administration of Emeka Ihedioha was a conduit pipe for fraud and corruption .

A statement yesterday by the commissioner for information and strategy, Declan Emelumba, explained that the governor  made it clear to the Pensioners that  the delay in the payment of March allowances was caused by the government's determination  to flush out fraud from the system and not for lack of money

The commissioner said the government  has saved over N300M in pension payments  through detailed scrutiny of  the pay roll which  exposed a lot of lekages  and ghost recipients in the system .

The chairman of the state association of Pensioners  Dr. Josiah Ugochukwu, agreed with the governor that the use of a consultant for pension payments by the sacked administration of ihidioha was a conduit pipe for fraud. He said his association opposed it but the then government  paid deaf ears, the statement added.

The commissioner said the government discovered that the use of a consultant was a ploy to defraud the state by opening avenues for questionable payments of over half a billion Naira to an external consultant who by law cannot be audited  by the state Auditor General , adding that there was practically no role for a consultant in payment of Pensions

The governor sees pension money as blood money because it is money saved from the sweat of elder statesmen who sacrificed their youth to serve the state so he is determined to ensure that only those entitled to Pensions get paid, the statement further explained.

On the delay in the payment of March salaries to local government workers the commissioner said it was caused by an unusual bloating of the pay roll.

On questionable discrepancies in the wage bill of LGAs the Commissioner said  that it was curious that some local governments with less staff were carrying a wage bills higher than those with more staff and asked " how can owerri municipal with highest number of workers be paying N15M as salaries while Ihete Unoma with less staff is paying N56M", adding that the government was determined to get  things right from day  one even at the risk of blackmail .

The information commissioner  insisted that while the government was  determined to pay workers and pensions at the end of the month it will not be blackmailed into doing the wrong thing.

"The governor has made it clear that he will pay salaries and Pensions by the end of every month but the payment will be made to only those legitimately entitled to same and not to criminals who present false BVN or false account details in the pay roll to reap off the state.  Every salary and pension payments must conform with all e- payment requirements and this government will not be blackmailed into doing otherwise " the Commissioner said