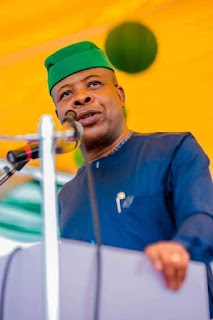 STATEMENT BY HIS EXCELLENCY, RT. HON. EMEKA IHEDIOHA, CON, AFTER THE SUPREME COURT DECISION ON THE IMO STATE GOVERNORSHIP APPLICATION FOR SETTING ASIDE OF JUDGEMENT.

On Tuesday 3rd March 2020, the Supreme Court of Nigeria gave a ruling rejecting our application to set aside its earlier judgement of 14th January 2020 on the Imo State governorship election. This is certainly not the outcome we wanted or we worked so hard for and I know how disappointed you must feel. While it is disheartening to note that your desire to introduce good governance has been halted, at least for now, it is also gratifying that our modest efforts have not gone unnoticed. I therefore feel a sense of pride and gratitude for the wonderful energy and commitment that we deployed together to secure the mandate that has now been brazenly stolen from us.


Permit me to use this opportunity to thank all those who played one role or another in this historic quest for justice and truth. I must thank members of the diplomatic community for voicing their concerns for the stability of our country. I commend the Chairman and Members of the Peoples Democratic Party (PDP) for their vanguard role and leadership during this period.


In particular, my special thanks go to all Imo citizens for their uncommon support, solidarity, and collective outrage. Never have a people been so united and committed to a cause. You prayed, fasted, marched, protested and even cried. You sacrificed your time, resources, and endeavour for this just cause. On this matter, the people of Imo State collectively rose to demand for justice and fairness. Imo people rose up in defence of their right to elect leaders of their choice. Our people resoundingly rejected oppression and power grab, defied imposition, injustice and tyranny. I salute Imo people for this display of courage in the face of oppressive state power.

I will forever be in the debt of Nigerians of all walks of life, across ethnic, religious and political divides, senior citizens, journalists, civil societies, ordinary men and women of good conscience, who added their voice to condemn the injustice done in our case. These are people unknown to me personally but who could not bear the illogic of turning number four to number one on the basis of a fraudulently procured result, and appealed to the Supreme Court to save itself and our judiciary.

Whatever may be the personal injury I suffer as a result of the miscarriage of justice, my main concern in this whole tragic episode is not about me. It has always been about the implications this judgement could have for the future of our democracy and the right of the electorate to have their votes count. If institutions that are critical to the entrenchment of rule of law could thwart the wishes of the people in a cynical manner, where lies the future of our democracy? That was why I sought a review of the Supreme Court judgement. Even though justice was not served at the end, the well articulated dissenting judgement delivered by His Lordship, Justice Centus Nweze, has vindicated our stand. I am sure that history and posterity will be kind to him.

To those who are rejoicing about their successful political fraud at the expense of Imo people, as well as their collaborators, let me leave them with the immortal words of the late journalist, Dele Giwa: “No evil deed will go unpunished; any evil done by man to man will be redressed; if not now then certainly later; if not by man, then by God for the victory of evil over good is temporary’.  We believe that God will render the ultimate judgment. He has been with us through this peaceful struggle. And our future is in His hands.


In conclusion, I wish to express my appreciation to members of our legal team who pushed the frontiers of electoral jurisprudence to advance our constitutional democracy. I wish also to thank my team of committed colleagues who served in various capacities during our administration. It has been a great privilege to serve the people of Imo State as Governor. I am proud to have been the recipient of their genuine mandate. I will forever cherish the support, solidarity and cooperation given to me during my tenure. My belief in the ultimate triumph and supremacy of the will of the people remains intact. I pray God to bless and reward all those who stood firm on the path of justice and fair play.


On a personal note, I accept trials and difficulties as part of life as they enable one to become wiser and more sympathetic to the plights of others in similar circumstances. But I am firmly resolved NEVER to give up on the struggle for a better Imo State. And for a better governed Nigeria.


May God bless Imo State and the Federal Republic of Nigeria. Thank you and God bless.