REPS SUMMON MINISTER OF TRADE, SON OVER INFLUX OF FAKE PRODUCTS, IN A MOTION SPONSORED BY DEACON CHIKE OKAFOR 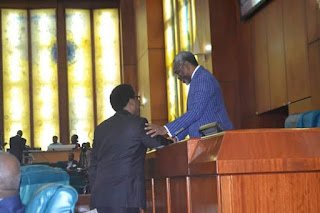 The House of Representatives on Wednesday summoned the Minister of Trade and Investment, Otunba Niyi Adebayo, and the Director General of the Standard Organization of Nigeria (SON) over the Influx of Fake, substandard and Counterfeit Products into Tue country and measures being taken to check the menace.

Adopting a motion sponsored by Rep. Chike John Okafor, the House also summoned the Director General of the Federal Competition and Consumer Protection Commission to explain the spread of fake and counterfeit goods in Nigeria.

According to Hon. Chike Okafor, the Standards Organisation of Nigeria is vested by law with the powers to confiscate sub-standard or counterfeit products and also has supervisory and prosecutorial powers against importers, manufacturers and producers of counterfeit products.

He lamented that the Organisation is yet to live up to its mandate to ensure the standards and quality of products imported into Nigerian or manufactured locally creating value for money for the products.

According to him, the domestic market in the country is currently awash with all kinds and categories of fake products including electrical, electronics, household appliances and equipment, building materials, automobile parts, adding that the Nigerian government appeared overwhelmed by the enormity of the menace.

He said further that sub-standard products manufactured or imported into Nigeria endanger lives and create a disincentive to investments and local production, thereby negating the whole essence of protecting Nigerian industries and have negatively affected the economy as foreign investors and Nigerian entrepreneurs who create jobs and contribute significantly to the economy are closing down because of their inability to compete with fake and sub-standard products being dumped in Nigeria.

He said the reoccurring tragedy of collapsed buildings has mostly been linked to the usage of substandard building materials imported or manufactured in Nigeria while most vehicular accidents have been attributed to faulty sub-standard or expired mechanical parts and tires in the country.

He said the goods and other products manufactured or imported into Nigeria should be of a standards that guarantees quality, save lives, encourages local industries and foreign investments in Nigeria and provides value for money.

He argued that the rate of substandard products and the hazard with counterfeit and fake products in Nigeria today is alarming and cannot continue like that.

He said it is on record that 40% of the fire disaster recorded in Nigeria in the last three years was caused by power surge mainly from fake and sub standard electrical products used in some of the buildings and many have died.

He said the negative economic impact of fake, substandard and counterfeit products in Nigeria is scary as record from National Bureau of statistics (NBS) has it that Nigeria has lost over 16billion dollars ($16 billion) with naira value of 4.3trillion to fake and substandard products alone.....The nation
POLITICS