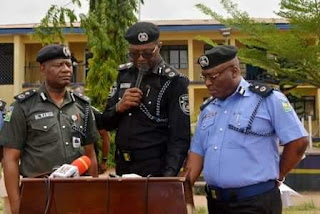 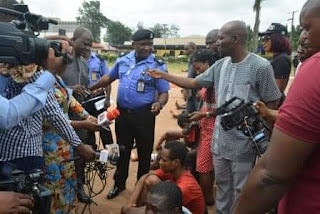 Gentlemen of the Press
It gladdens my heart once more to see you come around to witness some of our resounding breakthroughs within the past few weeks. During my last press briefing, I informed you all that Imo State Police Command under my watch will take the fight against crime and criminality to the den and hideouts of kidnappers and armed robbers. I also told you that we shall leave no stone unturned in fishing out the perpetrators of violent crimes in the State. To this end, I wish to present to you 26 suspects arrested in the course of investigation of some violent crimes ranging from Kidnapping, Cultism, Armed Robbery And Unlawful Possession of Arms etc.
Investigation in all the above cases have reached advanced stages and the suspects shall be charged to court for prosecution accordingly. We therefore thank Imolites for the information so far and likeOliver Twist, “we still ask for more” to enable us to continue to rid our dear state of crime and criminalities thus enthroning peace and tranquility in the state.
I therefore implore “Ndi Imo” to continue to cooperate with us, as together we can make Imo safer and more secured for business to thrive.
Our resolve to provide safety and security to all Imolites remains total, please.

On 4/1/2020 one Oduokike Chinonso Eulogies was kidnapped at Obosima Junction Owerri/Portharcourt road by unknown gunmen. The following day Uchechukwu Justine Okoroji ‘m’ was kidnapped at Amaifeke Orlu LGA on receipt of the reports operatives of Anti kidnapping swung into action and arrested the above named suspects after gun battle with operatives. They confessed to the crime and took operatives to a bush at Adapalm Estate where they murdered and buried one of their victims Uchechukwu Justine Okoroji ‘m’ after collection of one million Naira ransom (#1.m) the victim’s decomposing corpse was exhumed and taken to General Hospital Umuguma Owerri for Autopsy. Investigation continues.

On 26/1/2020, the wife of HRH Eze Dr. Emmanuel Okoro the traditional Ruler of Owaelu Uratta Owerri North LGA was kidnapped at her residence at about 2130hrs by unknown gun men who invaded the Eze’s Palace and abducted his wife to unknown destination where she was kept hostage. Hoodlums collected ransom of four million naira without releasing the victim.
Another kidnapping incident occurred on 31/1/2020 where one Okonkwo Uchechukwu ‘m’ and Nnaemekka  Ikeh both of Amaifeke 0rlu LGA resident at MCC/Uratta road were kidnapped and their Grey colour Toyota Venza Car reg. No. GGE 510 FM was robbed from them. On receipt of the information operatives of Anti kidnapping Unit Swung into action trailed and arrested one Kelechi Njamanze ‘m’ an ex-convict and he volunteered statement mentioning one Okechi Stanley Igbo alias WHITE as their kingpin.
In pursuance of the fleeing suspects, Okechi Stanley Igbo alias White was arrested and he in turn took operatives to their hideout for arrest of Tochukwu Chukwuemeka ‘m’ and Uchechi Ibekwe ‘m’. They confessed to the crimes and stated that Ugoeze Comfort Okoro died in their custody. Investigation is ongoing.

On 19/2/2019 at about 2330hrs, Polite Arinze Aburumba and his gang came to Mrs. Nkiruka Aauike’s house at No. 18 Royce Road Owerri, robbed her of her phones, cash of fifteen thousand naira (N15,000), they kidnapped her daughter of seven (7) years old, (Munachi Azuike) to unknown destination. The suspect Polite and his gang members collected a ransom of N500,000.00 from the complainant before her daughter could be released. The Victim spent nine days in an uncompleted building. The same suspect (Polite Arinze Aburumba) also introduced the same Nkiruka Azuike to one Lugard Johnson who claimed to be Agip Staff. On search of Agip Oil Company about three years ago, Polite Arinze Aburumba and his 419 group, defrauded Mrs. Nkiruka Azuike the sum of Three Million Five Hundred Thousand Naira (N3,500,000.00), case is still under investigation.

On 16/02/2020 at approximately 1740hrs at Ajii in Oru East LGA Imo State, SARS operatives arrested a notorious kidnap suspect, one Charles Nnanna ‘m’ Ajii from Oru East LGA Imo State. It is worth nothing that on 1/9/2017 at 2035hrs, some group of kidnappers using a Toyota Avalon car double crossed one late Rev. Fr. Cyriacus Onunkwo of Orlu Catholic Diocese who hails from Osina in Ideato LGA AT banana Junctio, Orlu LGA Imo State. He was dragged out of his Toyota Corolla Gray in colour with reg. no. Imo KED 290 AA into their Toyota Avalon. His lifeless body was found at Omuma in Oru East the following morning. SARS operatives arrested six suspects while one fled to Indonesia. The six earlier suspects confessed to the crime in that they used cello tape to seal his mouth, unknown to them the mouth was sealed. Through a whistle blowing strategy and forensic technology, the last suspect Charles was arrested while on his traditional Wedding upon his return from self exile in Indonesia. He has confessed to the crime, investigation is ongoing.

Sequel to a distress call received at SARS Annex Mgbidi on 22/02/2020 at about 0950hours, that some armed hoodlums abducted one Tobias Okeke Ugo ‘m’ of Umudim Umutanze village in Orlu L.G.A of Imo State. SARS Operatives led by Inspr. Kingsley Chukwu swung into action through discreet intelligence gathering within the area, in which one Chinonso Nnaemeka ‘m’ was arrested, upon which a Toyota Camry car with no EFR 173 HX belonging to Tobias Okeke Ugo ‘m’ was recovered in his possession. Base on the confessional statement of Chinonso Nnaemeka ‘m’ operatives preceded to Aba Abia State for arrest of Chinonso’s accomplice, one Chidi Okonkwo ‘m’ which proved abortive as suspect absconded from his native doctor’s hiding place aided by one Onyekwere Ogala ‘m’ and Onyinyechi Okonkwo ‘m’.
Suspects have confessed to have murdered Tobias Okeke Ugo ‘m’ with a machete and dumped his corps in a nearby bush at Umutanze Village and made away with his car and cash which is yet to be estimated. Operatives have since recovered the corps of late Tobias Okeke Ugo ‘m’ and deposited at St. Damian mortuary Okporo in Orlu L.G.A Imo State, awaiting autopsy report for necessary action.

Based on several complaints by the residents and commuters plying Orlu/Anambra Road about the constant criminal and robbery activities on that road, a constant Police surveillance was mounted on the road by men of the Anti Cultism Unit.
Consequently, on 10/2/2020 at about 0500hrs, acting on a tip off that some hoodlums were operating along Orlu/Anambra Road, a team of the Anti-Cultism Unit in collaboration with local vigilantes swung into action in which the above named suspects were arrested on the spot with Two Locally Made Pistols and Ten Rounds of Live Cartridges recovered from them. Further investigation led to the recovery of more Four (4) locally made pistol, one automatic pump action gum with Thirty (30) Live Cartridges and Five (5) Honda Motorcycles.

On 10/01/2020, acting on a tip-off that the above named suspects with the connivance of one Faith Solomon ‘f’ kidnapped one Sunny Isiguzo aged 28yrs at gun point, bundled him to the said Faith Solomon’s house and naked him as Faith Solomon also naked herself while the suspects took pictures of them together. The suspects demanded for a ransom ofN1,000,000.00 (One Million Naira only) otherwise they would kill the victim and spread the image of his nakedness on the internet. Consequently, the above named suspects were arrested and they have made confessional statements, naming four other fleeing suspect. Investigation also led to the recovery of the above named exhibit belonging to the arrested suspects.
Investigation is still ongoing, as an effort is on top gear to arrest the fleeing suspects. Meanwhile, suspects in custody will be charged to court accordingly.

On 27th February 2020 at about 1430hrs, Operatives of the Commissioner of Police Surveillance Unit while on a routine surveillance patrol at Ohii Area, Owerri West LGA, arrested the above named suspects. On searching them, one unserviceable English pistol tied with a black tape was recovered from one of them.

In a similar development on 13th February 2020 at about 1730hrs, Operatives of the Commissioner of Police Surveillance Unit while on a routine surveillance patrol at Amausa/Douglas Road arrested the above named suspect. He was searched and a locally made pistol with one catridge was recovered from him. He confessed that he has been using the pistol to rob phones and money from yet to be identified victims along Douglas Road. That he stole the gun from his friend at Ivo in Ebonyi State and relocated to Owerri, Imo State.

Furthermore on 26thFebruary 2020, at about 2030hrs, Operatives of the COMPOL Surveillance Unit while on a routine surveillance patrol by MCC Road, arrested the above named suspects and two locally made pistols recovered in their possession. The suspects confessed robbing one Obi Nancy ‘f’ of her Infinix Note 5 handset along Prefab with the guns. Ikechukwu Ozor confessed to have stolen the locally made pistols from his late grandfather’s room at Umuakagwu, Ehime Mbano LGA and relocated to Owerri with his friend Kennedy Onyenagadam.

Acting on a tip that on 22/01/2020, along Umuegbe of Umueke Isiala Mbano, Operatives of D9 Section of the State Criminal Investigation Department arrested the above suspects in connection with a case of car snatching. The suspects were alleged to have block their victim with motorcycle at gun point and dispossessed him of his Black colored RX350 Lexus Jeep and other valuable items. The suspects have confessed to the crime and will soon be charged to court. 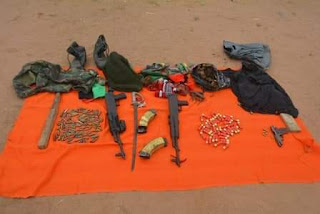 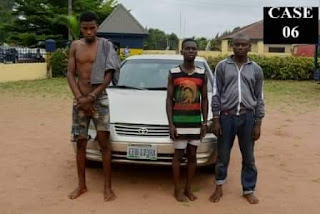 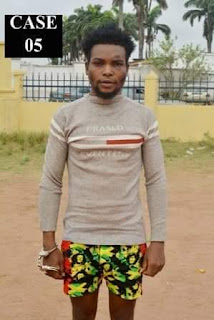 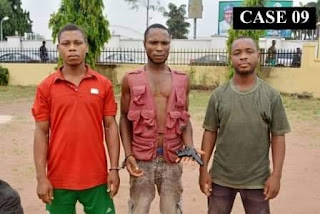 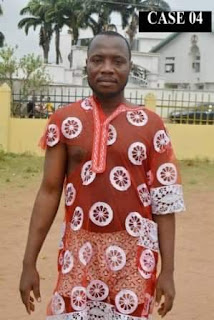 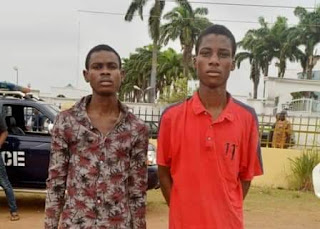 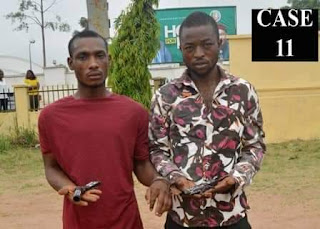 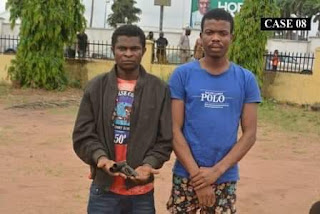 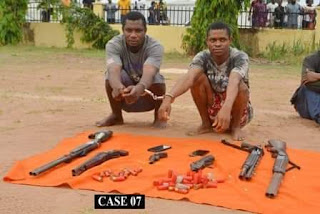 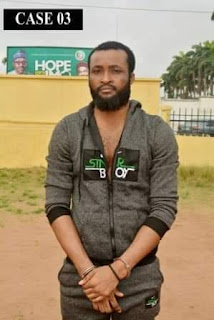 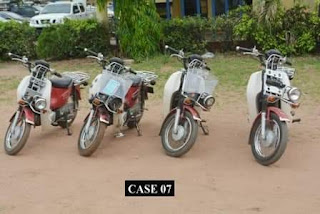 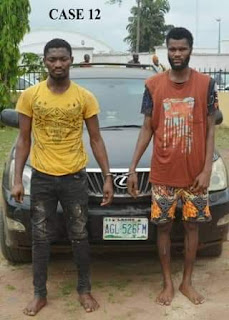 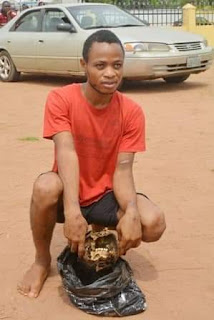