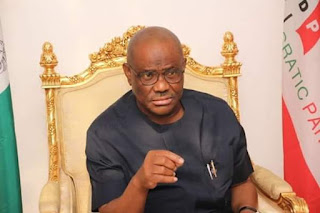 Rivers State Governor, His Excellency Nyesom Wike, on Tuesday warned Imo State Governor, H/E Sen Hope Uzodinma to be mindful of his utterances as fraudsters do not talk in public or else his secrets would be revealed.

Wike was responding to an allegation credited to Sen Uzodinma where he accused the Peoples Democratic Party, PDP, of being behind the suspension and General ordeal of Mr Adams Oshiomhole.
A shocked Wike said such an allegation was unfounded and an unfortunate lie.
“It is unfortunate that Senator Hope Uzodinma will have the temerity to make that false allegation (that PDP conspired to suspected end Oshiomhole).
“Hope Uzodinma was an APC agent while he was in PDP,” Wike said pointing out that, “That was why APC used him as an agent to support Ali Modu Sheriff,  but they failed.
“It is unfortunate that people of questionable character are in Government.  Hope Uzodinma cannot talk about the attempted removal of APC National Chairman and mention the PDP. What is our business in the attempted removal of Oshiomhole?
“APC does not mean well for Nigeria.  It is a party of strange bedfellows merely formed to take over power.
“If Senator Uzodinma dares to make such false comments again about the PDP , we will tell the world about him.
That he fraudulently took the mandate  of PDP does not mean that PDP is weak. Hope Uzodinma lacks the capacity to discuss the PDP.
“We must protect the Judiciary to do its work.  But the Judiciary should protect itself.  APC has destroyed the Judiciary.
“The Judiciary should be very careful.  The Judiciary should be alert. It should not allow itself to be used. It should not allow itself to be destroyed.
“APC should not be allowed to destroy Judiciary. Judiciary was there before APC. It was there before any political party. I cannot see the Judiciary being destroyed and keep quiet.
“I am not interested in what happens in APC. But I am concerned with the Judiciary and its survival.
The Chief Justice of Nigeria should caution judges.
“With what the APC is doing today, we may not have the Judiciary and everyone will pay the price. The party is trying to destroy the hope of the common man,” he said un series of tweets  through his official Twitter handle @GovWike
POLITICS