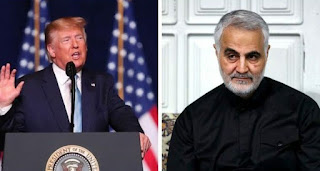 Iran has placed a huge bounty on the American President’s head following the death of General Qassem Soleimani, according to reports.

The Iranian General was killed last week after a US drone strike on his convoy at Baghdad airport. A video posted on social media shows huge crowds marching in protest following Soleimani’s death, before a male voice can be heard placing a bounty on the US President’s head.

Iran government said “On behalf of all of Iran’s people – 80 million Iranians – and each puts aside US$1, it would equal $80million.

“And we would give this $80million, on our own behalf, as a gift to anyone who brings the head of the person who ordered the murder of the grand figure of our revolution.

“Anyone who brings us the head of this yellow-haired lunatic, we would give him $80million on behalf of the great Iranian nation. Chant if you agree.”

He said: “We can attack the White House itself, we can respond to them on the American soil.

“We have the power, and God willing we will respond in an appropriate time.”

Mr Abutorabi added: “This is a declaration of war, which means if you hesitate you lose.

“When someone declares war do you want to respond to the bullets with flowers? They will shoot you in the head.”

Thousands of people took to the streets in anger following Soleimani’s death after the US airstrike on Friday.

Soleimani’s body was flown to the city of Ahvaz in southwest Iran on Sunday following massive funeral marches in Iraq.
NEWS