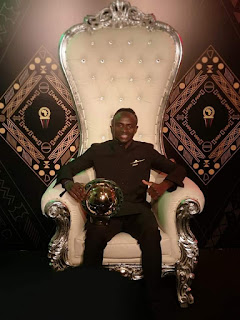 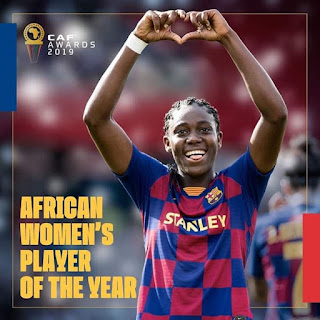 Egypt was agog on Tuesday, January 7  as football icons, legends and stakeholders gathered for the 28th edition of the CAF Awards, an event to celebrate African footballers and officials who distinguished themselves during 2019.

Mane was crowned the African Player of the Year, polling 477 votes ahead of his Liverpool teammate Mohamd Salah, 325 votes and Algeria’s Riyad Mahrez, 267 votes.


Sane becomes the second Senegalese to win the award after El Hadji Diouf, who was the winner in 2001 and after joining Liverpool in 2002.

Mane scored 34 goals and produced 12 assists in 61 appearances in 2019, according to CAF statistics.

Speaking about the award, he said, “I am really happy and at the same time I am really proud to win this award. It’s a big day for me.”

“I’m very happy and proud to win this award. I thank my teammates at the Senegal national team and also my club, Liverpool for their support”.

Oshoala, who plays for Spanish side Barcelona, beat Ajara Nchout of Cameroon and South Africa’s Thembi Kgatlana, who was crowned in Senegal last year to claim the title.

It is the fourth time the 25-year-old is being crowned the best African female footballer.


She won the award in 2014, 2016 and 2017, and was also among the final three in 2018 but lost to her South African rival Kgatlana, equalling the record of her compatriot Perpetua Nkwocha


Sadio Mane, 2019 African Player of the Year
In the youth category, Morocco and Borussia Dortmund defender, Achraf Hakimi, was crowned the African Youth Player Of The Year.

The Egyptian Football Association won the Federation of the Year award.

Tanzanian afro-pop star, Diamond Platinumz thrilled the audience with a live show of his music that saw the guests dancing in their seats.

Lebanese group Mayyas, winners of the 2019 edition of Arabs Got Talent, a television reality show, enchanted the audience with their choreography skills.

African Player of the Year

African Women’s Player of the Year

African Interclubs Player of the Year

African Youth Player of the Year

African Men’s Coach of the Year

African Women’s Coach of the Year

Federation of the Year

Goal of the Year