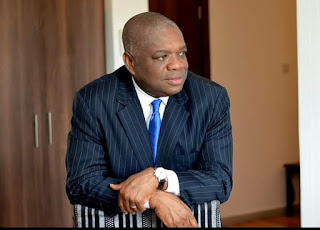 Justice Mohammed Liman of the Federal High Court in Ikoyi, Lagos, on Monday, dismissed an application for a post-conviction bail filed by a convicted former governor of Abia State, Orji Uzor Kalu.

Mr Kalu had on December 17, 2019, filed the application, following his conviction and sentencing to 12 years imprisonment for N7.1 billion fraud by Justice Muhammed Idris sitting at the Federal High Court in Ikoyi, Lagos on December 5, 2019.

In the application, Mr Kalu, through his lawyer, Lateef Fagbemi, had claimed that he had health challenges that could not be managed by the medical facilities in the Custodial Centre in Ikoyi, Lagos.

He had also argued that the offences for which he was convicted and jailed were bailable.

Mr Kalu had, therefore, prayed the court to free him, while he challenges his conviction by Justice Muhammed Idris at the Court of Appeal.

However, counsel to the respondent, Rotimi Jacobs, opposed the application for post-conviction bail, saying, “Although bail is generally a right of an accused as guaranteed by the Constitution, it is not a right available to a convict because the presumption of innocence had crystallized into guilt and conviction.

“An application for bail pending appeal is sparingly granted.

“Such a bail can be granted in a situation, where the term of imprisonment would have elapsed before the determination of the appeal.

“But that is not the situation in Kalu’s case.”

Mr Jacobs had also argued that the medical report tendered in the case was obtained over a year ago.

“There is no recent medical report to show his state of health,” Mr Jacobs had further told the court.

After listening to both parties, Justice Liman fixed Monday, December 23, 2019  for ruling on the application.

Ruling on the application, Justice Liman dismissed the application for lacking in merit and also ordered Mr Kalu to remain in the prison custody till his appeal is heard.
POLITICS