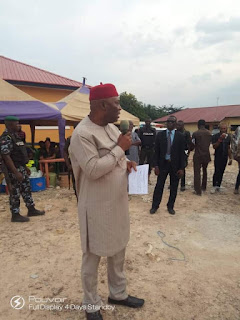 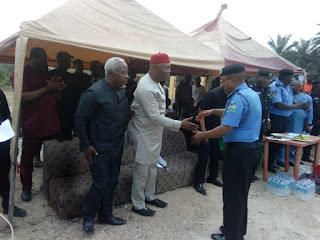 His Excellency Rt Hon Emeka Ihedioha has made true his promise of Rebuilding Obowo Police Station.

It can be recalled that on the 1st of July 2019,  a very serious and sad event involving one trigger happy policeman,  Sgt Nwanesi Okechukwu, who guned down and killed Master Ikenna Ukachi. After he discovered that he has killed the young man, he ran away which provoked the youths of Umuokeh Autonomous community to attack and burnt down the police station at Otoko Obowo, breaking of armory, chattering away all the rifles and also burnt down the patrol vehicle. 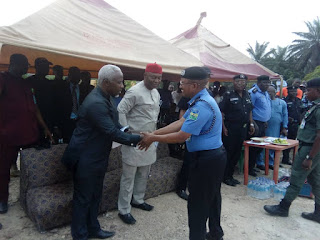 Due to his quick intervention, relationship existing with the police and members of the community became very cordial

It was indeed a thing of joy today for the good people of Obowo to receive a proud son of Obowo who represented  Gov Ihedioha  at the Reopening of the ultra modern facilities.

The Divisional Police Officer, Obowo LGA Sabo A Baba in his welcome address narrated the ugly and sad incidence


He thanked the Governor, Chief of Staff, Commissioner, IMC Chairman for their much concern and doggedness .

He enumerated the achievement of the Nigerian Police Force despite not having a place of work in Obowo for 5 months.

The Cp in his remark noted that the Governor has rebuilt Obowo police headquarters within a short time. He is doing very well in Imo State and the way he is working tirelessly, he is going to be the best Governor in Nigeria.

" Today I stand here to tell you, that since the ugly incidence, the Governor and Chief of Staff has never allowed me to rest, he has been disturbing me to ensure that there is adequate and full security restored in Obowo. You people are lucky to have a man like him in Govt House. He is very active, supportive and the Governor listens to him.

We are not supposed to be here to celebrate the reopening of this place. I feel very sad each time I remember that innocent boy that was shot dead by a careless police officer. I promise all of you one thing that police officer must be apprehended. "

"let me also warn us, it is not good to take laws into our hands. It will never pay.  Now that the police station is rebuilt, you can now lodge your complains to the police here.


In his remark, Chief Okewulonu said :

"His Excellency's joy knows no bound as full security operations has returned to Obowo LGA today. Our people who are coming back home for Christmas can now sleep with their eyes closed.

"No state or community can develop in the absence of peace and security.

" No investor will come and invest in Obowo if there is insecurity. That is why we must encourage our young ones to shun crime.

This Government has zero tolerance for crime. And we shall no longer tolerate any form of criminality"

" His Excellency is a humanist, whatever touches the lives of another touches him"
That is why when the incidence occurred on 1st July 2019. His Excellency, left all the assignment the next day and proceeded to the house of the young man who was killed"

"I can recall vividly that when he visited this place which was burnt down by angry youths and hoodlums. He  made pronouncements as regards rebuilding of the building, replacement of the patrol vehicles and returning of the arms which was carted away by hoodlums.

I am happy that today, all those has been accomplished. "

The COS equally commended the Commissioner of police -CP Rabiu Ladodo

He is a courageous and good leader, a super crime buster,  who according to him is  both Accessible , Responsive & Responsible 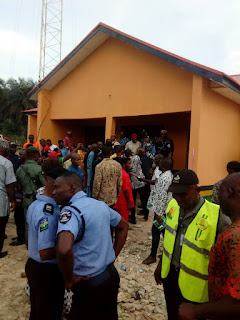 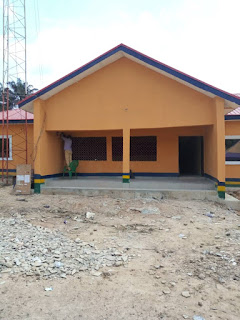