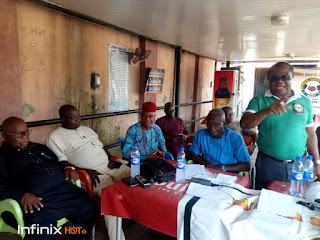 Anambra state south agenda 2021, a body for the actualization of the vision for a governor of Anambra South extraction has insisted that a governor of Anambra South Agenda can not be negotiated or wished away for any reason. The group led by Ven. Chris Orajekwe, made this assertion over the weekend at Nnewi, during there end of year get together and induction of their women arm.


The coordinator, Ven. Chris Orajekwe harped on the need for togetherness in the group to ensure that a governor of Anambra South extraction is actualized. He insisted that the vision is non partisan, which is sound devoid of any party affiliation, because they want the best from Anambra South to emerge as the governor come 2021.


The meeting was used for the ratification of positions and constitution of the women wing of the group, who he said are now part of the steering committee of the group.


He described the women as the power house of any group and thanked them for their steadfastness, while urging to go to the nooks and crannies of Anambra South to preach the message from the group, which lays emphasis on the emergency of the next governor of the state from Anambra South.

The women were infact thankful for the actualization of the group. As they spoke one after the other in support of the vision and mission of the group. Mrs. Amaka Mbadiwe, the Deputy Coordinator Women Anambra South Zone, Agenda 2021 in her speech during the meeting thanked God for the vision to actualize this dream. She said, in Anambra, Anambra South has suffered immense hardship because of the neglect of the area by past administration, which lays emphasis on the many ecological problems facing them in the various local governments. She gave instances with the gully erosion at 100 foot road, which has destroyed properties worth millions of naira without any government coming to their aid. She maintained that there is no better time than now for the actualization of such dream of having a governor from Anambra South in Agu Awka in 2021.


In this same vein, Mrs Philomena Chukwunyere from Ihiala stated that the vision is in the right direction, and called for all hands to be on deck as they are fully in support of the vision. She wondered why someone from the central will even think of coming out to vie for a position they have saturated. He advised Hon. Tony Nwoye to stay clear of the fiber election in Anambra state as it will amount to him wasting his resources, because even his kit and kin will support a candidate from Anambra South.

A stakeholder in the project, Hon. Evangelist R.C.D Nwadavid( Ezeonodugo Na Umuchu) thanked  God for the vision and tasked the coordinator to keep faith alive, because its the right time to ensure that political jobbers are kept off the political scene in Anambra. He said that for the vision to be actualized, no politician from Anambra South should serve as deputy for any gubernatorial candidate from another zone, as the time is ripe for the emergence of a governor from Anambra South extraction.