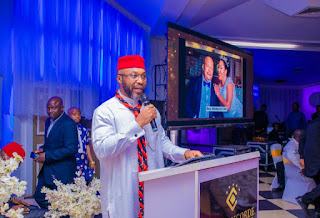 
Former Aviation Minister, Chief Osita Chidoka has made a strong call to all other geo-political zones in the country to yield the Presidency of the nation to the SouthEast, come 2023 to avoid a serious political crisis in the country.

The former Federal Road Safety Corps Marshal, maintained that such is the only sure way to guarantee the unity, national cohesion and political stability of the country adding that the nation may have to contend with very serious consequences if the South east is alienated in the race.

Chidoka, who spoke while reviewing a book by First Republic minister, Mbazulike Amechi “A Political History of Modern Nigeria: Words and Thoughts of Mbazulike Amechi,” on Monday, insisted that the two major parties, the Peoples Democratic Party (PDP) and All Progressives Congress (APC) should respect the zoning tradition and zone the 2023 Presidency to the South East.

Chidoka said ‘I crave your indulgence to use the words of the Northern Elders Forum (NEF), used in an advertorial where they warned President Jonathan not to contest the 2011 election, to sound a note of warning that, “If the country’s two major political parties do not continue in the tradition of the agreed rotation, they will “undermine the peace and tranquility of Nigeria”.  Furthermore, failure to incorporate the South East in the 2023 calculations will be “ill-conceived, ill-advised, and definitely divisive”.

Further echoing the words of the NEF, Chidoka cautioned that using perceived strength to alienate the Igbos in 2023, “would open old wounds of primitive politics where ethnic, sectional, religious and other primordial, undesirable sentiments will assume center-stage with attendant unpleasant consequences”.

Chidoka noted that the South East has always been committed to the unity, harmonious co-existence, mutual understanding, economic development, social and political wellbeing of the country as a whole, adding that it is time, narrow minded individuals in other parts of the country drop their unfounded distrust of Ndigbo, and fight to enthrone the politics of live-and-let-live.

“Electoral results show that the South East is ethnically blind when it comes to voting.  We voted Obasanjo, Yar’Adua and Jonathan against Igbo Presidential and Vice Presidential Candidates. This voting pattern is the ultimate proof of the cosmopolitan ethos of Ndigbo.

“In Presidential elections, South East votes have been cast on a largely ideological basis in support of inclusion, rule of law, freedom, democracy and open markets.  They will vote against an Igbo Vice President if he is co-yoked with a president who is anti-market, anti-merit, and divisive.  They will vote for a Northerner and a devout Muslim if they believe he is a man of character and a unifier. It is time for the country to take note of these salient points, drop their unfounded distrust of Ndigbo, and fight to enthrone the politics of live-and-let-live.

“In 2019, of all the regions of Nigeria, the South East region gave General Buhari the largest percentage increase in votes.  While Buhari’s votes in the North West (his core voting block) declined by about 15 percent in 2019 (when compared to 2015 election results), his votes in the South East region grew by over 200 percent over his 2015 votes.  He got 25 percent of the votes cast in three South East states where, in 2015, he got less than the (In)famous five percent of the votes.”

“It is also important to note that on January 12, 2020 it will be 50 years after the civil war. The generation born during and after the civil war are now in their 50s free from the prejudices of our chequered past, hopeful of a new paradigm of equal opportunities and conscious of global trends. That new generation provides a new opportunity which if lost will be at great cost to Nigeria”.

He also urged northern leaders “to recalibrate its position on the rest of Nigeria as this winner-take-all mentality may neither be sustainable nor enduring”.
Chidoka however advised the southeast not to rest on its oars and wait for Igbo Presidency but to constructively engage with the rest of the country to actualize the dream.

“Let us not sit and wait for “restructuring” or “Igbo Presidency”. The political class of the South East should be bold, creative and constructive in affirming our right to the highest office in Nigeria or in the continuous alteration of the constitution to reflect the region’s strategic interest.”
Chidoka extolled Amaechi’s leadership qualities adding that his book emboldens all well-meaning Nigerians and deepens our collective resolve to speak the truth as we see it.