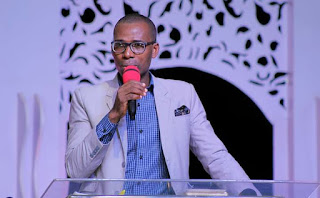 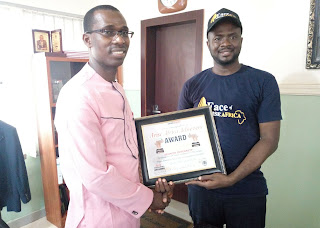 Congratulations Sir, for emerging one of the Award Recipient at Arise Africa Achievers Award. Arise Africa Magazine celebrates your vision, contributions to youth development across Africa

Can we really know what inspired you and the secret of of your success in Ministry?

I am  in ministry not because of personal gain but in fulfilment of God's call upon my life.

I am really encouraged that what we are doing in the Kingdom  was able to attract this recognition and honour.

We are not doing it for men to see us, the service is unto God. And I want to urge you for you to  have success in ministry, you need to stay faithful.

For some folks business starts immediately after service, once they go for early morning mass and come back their real self now comes out.

We don't have integrity. Why are people migrating from church to church? The reason is not far fetched. Many are leaving from one church to another because of Debts. A lot of people are owing.  They collect money and  cannot pay back. Many cannot keep to a simple written agreement. Once the debtors start coming after them, the next thing they do is to migrate to another Church.

Or the lender who borrowed the money gets so angry over the way its being delayed, angry at the brother, angry at the pastor or the church and leaves out of frustration

What we see is the church today is the function of what the church is being feed.

People behave the way they do as a result of the message they hear and that becomes the pattern of life in the society.
Even people who work in the church.

This will shock you; the corruption we see out  there in the world is also in the Church. The ethnicity, division, crises we witness outside are all in the church.

During the banking Reform by Sanusi, there was total sanitization of the Banking industry which lead to sack of various CEO and merging of banks. It might shock you to know  that most of the people who were not keeping to the rules , the top CEO's of banks were church people, and these men were backed by men of God.

A Muslim became the Vc of Kwara University and sanitized the Institution. There were several Christians before him but the corruption in the system kept going on.

Many wake up in the morning a Christian go to work and come back dirty, because of how corrupt the system is at their work place and they were not able to stand firm. We need to earnestly contend for the faith which was delivered to all the saints. That is why we need to teach the truth of Gods word all the time.

When the people hear the right thing, it would take time but they would be positively affected.

Where was the pastor of Joseph? Even when no one was looking at him and it was just him and Portipher's wife, he had to flee for his life. He was in the mist of ungodly people, he did not loose his value. He was creative, he was prosperous because the Lord was with him.

2. Today, we are far loosing it. Because there is wrong definition of success and achievement. What is success?

Success is doing what God has called you to do per time. Jesus is a success. We are still benefiting from that success generation upon generation. But by history, he died as a criminal, he had no house of his own, he rode a borrowed horse, was buried in a borrowed tomb. He had no material possession. But he lived a successful and fulfilled life.

Your life is not measured by the abundance of things you possess.
It is living for something.
And that thing you are living for, you are not looking for money, you first want to impact lived and make a difference in the world.

There are some Gospel singers, ministers when you call them to come and minister, they will tell you this is what you will give me before I can come.

So we cannot access their gift because of the prize tag. Some would say to you "I would come. I don't charge, but I have a minimum which is N500,000 just to sing'

Some would try to know the number of your congregation, location etc and access you before they come.

They want to know their honorarium before they come. And when they do eventually come after ministering, you will begin to wonder the character and quality of what they deliver.
We see all the above today because SELF is alive. We need to die to self in ministry.
No one is ready to die to self, how will anointing flow?

As a minister, you have to use every platform God has given us to change the world.
Be diligent, stay in the word and in the place of prayer so the Power of God can flow through you.

You cannot manipulate the gift of God.
Simeon said "Take money and give me power" and the Apostle rebuked him. "your money perish with you"

You cannot make merchandise of the Gospel.

Reason why so many tow this path is because they are driven by wrong motives. If you cannot handle little things, God would not entrust you with bigger things.

It is God that prepared people.
Believers can go to lead but let it be those whom God has prepared.
Daniel served over 4 different Kings. He was speaking truth to power all the times. Everything he did was excellent, there was no fault found in  him.

He was tested in all ways and he was without fault. The only way his detractors could get him was by his Commitment to God. How committed are you?

Our focus should be to advance God's Kingdom in this dark world.
Salt does not loose its value.  Anywhere it enters, it changes the whole environment. That is the role we are to play in our society today.

We can count the number of churches we have today and yet the level of iniquity abounds.
Many hear the word of God but when the pressures of life or little difficulty comes it shakes them off their feet.

If what you are praying is not inline with the will of God , Heaven is not committed to it.

And how do you know the will of God, by searching the Word.

Today we have Christians that cannot endure little hardship, so any little discomfort they presume its must be Satan but that is not the case.
These processes is what will build character in you as a believer.

Our prayer should not be "Give me" but "Make Me".

We are so much in a hurry from the media perspective there is a lot to be done. We have to start projecting a new mindset of what success truly is. When we allow material things of this world to drive us. These things will control us and destroy. But if we allow God to control us these things will become benefit to us.

Emmanuel E. Itua is a teacher of God's word with profound insight and simplicity. As a writer, his first outing, In the Flow of the Spirit, launched him as an insightful author. This book is a follow-up on that debut.
His unending desire to bring believers into the reality of God’s presence in devotion and sound knowledge of the word, inspired his second book, Drive for Faithfulness, and “Reality Hour,” a weekend radio programme which he currently hosts.
Emmanuel Itua is happily married to Tubolaiyefa – ‘Tubo’ as she is fondly called – who has been a resourceful companion. They make their home in Owerri, south east Nigeria where he currently pastors Firstlove Assembly.
ARISE AFRIKA MAGAZINE RELIGION