Prof Adaobi Obasi: A Blazing Trail In The History of Imo State University 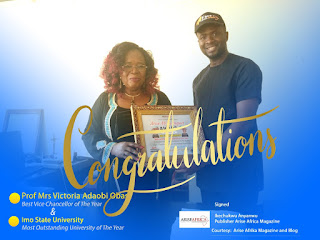 Congratulations to Prof Adaobi Obasi: A Blazing Trail In The History of Imo State University

Accolades, encomiums, congratulatory messages was showered on Prof Mrs Adaobi Obasi  during a courtesy visit by Founder of Arise Afrika #Magazine / Ceo Face Of Arise Africa Awards and Team members after the celebration. 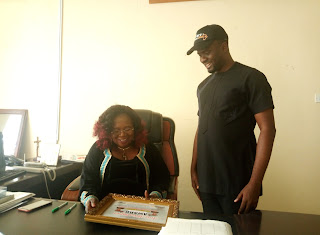 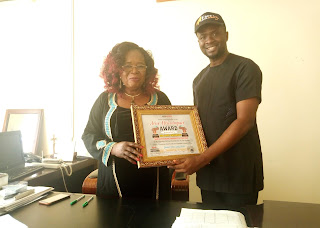 In their address, they stated that there is no doubt that our amiable Vice Chancellor -Prof Mrs Adaobi Obasi has been exceptional in inspiring and impacting our youths.

Adding his voice, the publisher of Arise Africa Magazine described her as a down to earth woman who always interacts with people, ranging from old or young,  irrespective of status. He said, Arise Africa applaud her giant efforts towards women and youth empowerment and not surprised that she emerged one of receipent  of Award as "Best Vice Chancellor " and the Institutions also bagged "Outstanding University of The Year" during Arise Africa Achievers Award which held at Full Moon Hotels Owerri, Imo State. She was represented at the occasion by Prof Martins Uchenna Nwankwo - Digital Dean Student Affairs, Imo State University

Prof. (Mrs.) Adaobi Obasi is the  Vice Chancellor of Imo State University (IMSU) and  has continued to play vital role towards restoring the institution’s lost glory of once being the best state owned university in Nigeria.

Prof Adaobi Obasi remains an altruistic administrator who desires nothing but the best for the university community. She is a Professor of Education (curriculum), BA (Ed), MA (Ed), and Phd who encourages other Professors to engage in research works for academic excellence. She is the first female Vice Chancellor of State owned Universities in Nigeria.

Since her appointment after serving as a Commissioner of Education with the rescue mission government of His Excellency, Owelle Anayo Rochas Okorocha.  She indeed has rescued Imo State University from its near total collapse since after the era of Prof. Chuka Okonkwo whose tenure was also rated high.Today her giant strides are evident for all to see in terms of conducive learning environment, improved infrastructural facilities, harmonious working relationship among staff whereby most of the warring factions in the university have been brought under one of peace, harmony and mutual co-existence.

Prof. Obasi, a lady of St. Christopher (LSC) in the Anglican Communion, her administration has guaranteed dignity of labour, peace, security of lives and property, aggressive infrastructural development, skill acquisition among others and these corroborate the saying that when the righteous is in power, the people rejoice and is clearly evident in the style of leadership as experienced presently in Imo state university.

A rare achiever as described by many, Prof. Obasi is one of the most experienced professors that Imo state is blessed with. She is a woman of wisdom, compassion. The peace and tranquility presently experienced in IMSU today have led to the meritorious promotion of over 50 new professors.

Anybody that visited IMSU 5 years ago and peradventure visits it today will truly know that there is improvement from what it used to be in the past.

Her administrative acumen and prudent management of funds have led to the massive infrastructural development witnessed in the institution today. The way she pulled through despite harsh economic challenges to still deliver is a sure testimony that the institution is in a better hand.

Since the inception of her administration as IMSU VC, there has been continuous infrastructural development including the magnificent Senate building which is one of the best in the country, female hostels which stand as the first in the annals of IMSU. Also on going is massive renovation of dilapidated structures around the institution thereby repositioning the school and enhancing a more conducive learning environment.

Going by these numerous achievements recorded by Prof. Adaobi Obasi as the Vice Chancellor of Imo State University, Owerri, one can only say bravo for a job well done so far and pray for more grace, strength and wisdom to attain greater heights
NEWS