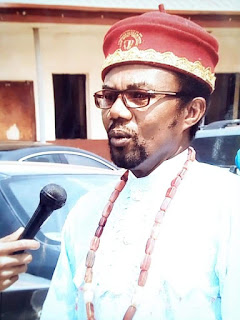 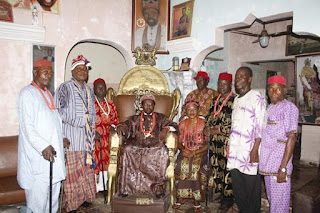 As a traditional ruler he has helped  douse tribal tensions in
Abuja, the Federal Capital Territory which has six Municipal Area Councils.


Karu is one of the satellite towns in the FCT and has a large number of non-indigenes.
His Royal Highness, Igwe Ezenwa Anyanwu, is the Eze Ndi-Igbo of Karu, the king of the Igbos in this area of Abuja.

He arrived Abuja 39 years ago, when he was posted from the University of Ife, where he read Agric Economics, to do his National Youth Service.
Immediately after his service, Igwe Anyanwu decided to settle in Abuja, where he worked, raised his family and retired.

At an earlier interview granted to press,  he revealed that he still has fond memory of the once rural Abuja he met upon his arrival, and marvels at the rate the city has developed to become a major capital city.
In his view, the permanent solution to ethnic tensions and disagreements in the country lies in regular meetings by ethnic leaders at the palaces of traditional rulers across the country, especially in the northern region.
He said: “The noise and tension that trailed the quit notice issued by the Northern Youth Coalition asking the Igbos living in northern Nigeria to leave on or before October  totally unacceptable.

From proper historical perspective, we are all strangers wherever we might find ourselves in Nigeria. Trade and migration of individuals, families, tribes and people have resulted in people moving from areas where they were born.

“So, no particular tribe or people can, in the true sense of the word, claim to own a particular place. According to Psalm 24, ‘The earth and all in it belongs to the Almighty God.’ The quit notice given by the Northern Youth Coalition to the Igbos is tantamount to human beings playing God. And seriously, this type of behaviour should never be encouraged in modern Nigeria.”

He, however, thanked the Vice President, Prof Yemi Osinbajo for the proactive steps he  took to douse the tension that followed the quit notice, saying matters like this are better handled by traditional rulers, who are custodians of their people’s cultures.
“My experience in the North shows that matters like this should be left with traditional rulers across the country to handle. This is all government ought to do. Once issues like this are officially handed over to traditional rulers by government, and backed with all necessary financial and moral support, traditional rulers will deal with such issues and produce results faster than people in government. Traditional rulers will be on top of issues like this, because they know their domains or kingdoms better than politicians in government. And once they are involved in the resolution, they know the people to contact and the likely troublemakers in their mist and what to do about such people. Before one realises it, the whole matter would have died down.
Igwe Anyanwu stressed that such threats don’t bother people living in Abuja, because of the proactive ways traditional rulers in the Federal Capital Territory handle such matters. He maintained that Abuja has never been rocked by ethnic crisis, as traditional rulers in the entire Municipal Council Areas do not tolerate ethnic segregation because of the FCT’s multi-ethnic nature.
“This is what makes Abuja tick,” he explained. “The Ona Of Abaji, a First Class Paramount Ruler in Abaji Area Council, who is also the Chairman of the FCT Traditional Council, alongside the Gomo of Kuje, who is the Secretary of the Council, have no patience for ethnic or sectional behaviours. This is why Abuja has continued to remain home to all Nigerians. The traditional rulers from all the six Area Councils in the FCT deliberately include ethnic leaders from all the tribes in their policy formulation processes and implementation in the day-to-day running of the city.”

Going down memory lane, Igwe Anyanwu recalled when he first arrived Abuja and subsequent experiences.
“Upon completion of Youth Service, I got a job with the Federal Capital Development Authority (FCDA), where I worked and rose to the rank of a Deputy Director before retirement. I have since embraced Abuja and the entire North as my home. I have married and raised my children here and some of my children, as we speak, are married to Northerners. I am, therefore, in a position to know what exactly the thinking of majority of Northerners is. As far as I am concerned, the present threat or quit notice is uncalled for and does not reflect the thinking of the North.
“Besides, so many people from the North have condemned the threat, including some northern youths, who have come out to openly denounce it. To me, this is an indication that most northerners do not support the unfortunate order. It is condemnable!”
Asked what the actual role of Eze Ndi-Igbo in the FCT is all about, Igwe Anyanwu said the principal function of the Eze, among other roles, is to help government and FCT management in the daily dissemination of policies and programmes, especially in the areas of security.
He said: “The Eze Ndi-Igbo arbitrates in matters involving Igbos in his domain. He is also the Ambassador of Igbos in the area, especially when other traditional rulers from other places in the country are gathered.
“The Eze is the custodian and promoter of Igbo customs and traditions, especially with regard to the way he dresses and conducts himself. This is exemplified during the New Yam festival and dances.”
So, in his view, what is the way forward?
“To put this unnecessary crisis behind us and move the country forward, henceforth, Town Hall meetings should be held at paramount rulers’ palaces across the North on a regular basis, where all the ethic or tribal leaders in these areas will be present,” he suggested. “Such avenues will give people and their leaders the opportunity to vent whatsoever anger or frustration they have bottled up over the years. And solutions will be reached without much ado. Such meetings will also provide an avenue for other tribes that are not so enterprising in the areas of business to be assisted.
“When people are fully engaged and in business, they would hardly have time for petty and unnecessary quarrels. Multipurpose Cooperative Societies, involving different tribes, their leaders and youths will no doubt evolve. Money realised from such activities will go a long way, if properly utilised, to make a difference in the lives of youths from different ethnic regions, in the areas of education and youth employment. Lack of education or means of livelihood are some of the reasons some people take solace in ethnic or tribal agitations in the country. 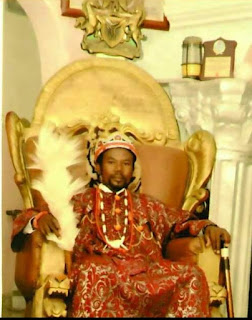 Asked to explain the difference between the titles of Igwe and Eze, he said: “The title Igwe connotes heavens, but it’s intended to convey at the same time both the majesty and divinity of the kingship office. This is because as a ruler, the king was considered to be the representative of God and the ancestors. On the other hand, Eze means Lord, king, ruler, first born son, which is to say, the first among the living sons of the ancestors of the realm.”
NEWS