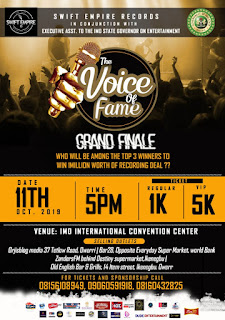 In line with it’s resolve to create a platform for fresh talents to showcase themselves, Swift Empire Records, an Imo state  entertainment outfit, launched a new music talent show some months ago, "The Voice Of Fame". The platform targets talented singers, rappers based in Owerri, who are ready to take advantage of the opportunity to hit limelight.

The initiative wants to provide a platform for qualified contestants to showcase their talents and after undergoing grooming, training and skill development process by swift Empire Recirds for a period.

The 3 winner of the show will emerge after weeks of voting and rigorous elimination processes. The 3 Winners of this reality show get to go home with a Million Naira worth of recording deal each and will hence become Swift Empire Records artist and will be managed, promoted and sponsored by swift empire.

A team of respected jurors comprising celebrity musician, A&R executives and music & entertainment writer, OAP, has been carefully selected by the organizers to determine the winners.

After months of selections which was through an auditions , the grand finale has been set for 11th October 2019 at the Imo International Convention Centre, Owerri. Come and watch these amazing talents display thrilling performances on the stage. For tickets call 08156108949,08160432825
ENTERTAINMENT NEWS