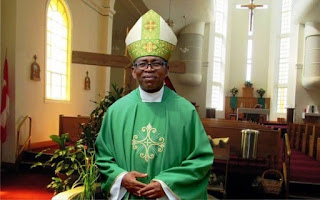 Born June 26, 1946, to late Mr. & Mrs Michael Obinna of Emekuku, Owerri, Imo State. Archbishop Obinna was ordained a priest of the Catholic Church on 9th April 1972, graduating that year from the Bigard Memorial Seminary and the Pontifical Urban University Rome, with a First Class honours Bachelor’s degree in Divinity (B.D.)

In 1975 he earned the Licentiate degree in Moral Theology (S.T.L.) from the Pontifical Lateran University, Rome earning at the same time a diploma in Counselling Psychology.

In 1976 he was employed to teach at the Alvan Ikoku College of Education Owerri, in the Department of Religious Studies. He worked at the same time as Catholic Chaplain to the College Community.

In 1984 he returned to Nigeria and continued to teach at the Alvan Ikoku College of Education, rising to the rank of Principal Lecturer and Head of Department of Religious Studies. Concurrently in 1984/85 he taught Fundamental Theology at the Bigard Memorial Seminary, Enugu.

While on Sabbatical leave in 1993 in the United States of America, he was appointed bishop of Owerri to succeed his revered predecessor, the late Bishop Mark O. Unegbu. He was ordained bishop 4th September 1993. On March 31, 1994, he was appointed Archbishop and Metropolitan, Owerri Ecclesiastical Province. He is currently the Chairman, Education Commission, Catholic Bishops Conference of Nigeria.

Under Archbishop Obinna the parishes in Owerri Archdiocese have grown from fifty to ninety three thereby increasing the pastoral challenges before him. He continues to face the responsibility of training seminarians for the priesthood, rebuilding the educational system with new schools, rehabilitating the Archdiocesan health care system with new structures, taking new project initiatives and helping church and society to grow in a healthy way.

His episcopal motto is: “To Serve God and His people”

Through the Odenigbo lecture series which he instituted in 1996, he promotes evangelization vigorously encouraging the use and development of the Igbo language.

Tomorrow is the grand finale of  silver jubilee celebration of Owerri Archdiocese. Thank you for shepherding the flock entrusted to your care with love in these 25 unprecedented years. You have kept the faith.

By 10 am tomorrow, there will be  provincial Thanksgiving Mass by Most Rev. Antonio Filipazzi, The Apostolic Nuncio to Nigeria.

Come and celebrate with us.
Profile